New York — Much has changed in the 21 years since Athol Fugard's play, "'Master Harold'... and the boys," first landed on Broadway.

Danny Glover, who had the smallest role in the three-character work, went on to international fame. Lonny Price, who played the young title character, became a director. And apartheid, the backdrop of the play's searing plot, went into the dustbin of history.

So much had changed that Price's twenty-something assistant recently looked blankly at a poster of the show hanging on his boss' office wall. Price asked him if he'd ever seen the Fugard play. No, came the answer. Read it in college? No, was the reply.

"I thought, 'My God!' I called Danny and said, 'We have to do this play again. We have to show these 20-year-olds a good play,"' Price recalls. "I wanted another generation to see it."

So Price and Glover have teamed up again, two decades after the play's original nine-month run in 1982, with a play that both helped propel their careers and introduce an American audience to the work of the South African playwright.

"When I read the piece again, it resonated as strongly as it did when I did it 21 years ago," says Glover, the star of such movies as "Witness" and the "Lethal Weapon" series. "I'm not 34 years old now -- I'm 55 years old -- and I wanted to see if I could do this journey again."

Not just about apartheid 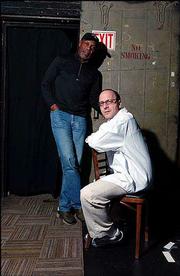 The play, set in a South African tea shop in 1950, centers on the relationship between the son of the white owner and two black servants who have served as surrogate parents. One rainy afternoon, the bonds between the characters are stressed to the breaking point.

The restaging at the Royale Theatre has a few changes: Glover, who had appeared as the younger servant, Willie, now takes on the meatier role of Sam. And Price, who had played the precocious Master Harold in 1982, is now in the director's seat formerly occupied by Fugard himself.

"It feels like I'm celebrating an old friend," says Price.

Other changes include the addition of Michael Boatman (TV's "Arli$$" and "Spin City") in Glover's old role; newcomer Christopher Denham takes on Price's previous part. The production has been given the blessing of Fugard, who sends e-mail every day.

Since the play deals with more than the issue of color -- involving, among other things, the struggle to become a man and the relationship between fathers and sons -- the collapse of apartheid in South Africa didn't deter Price and Glover.

"Of course, you could make an argument that it's only about apartheid, but it's not," says Glover. "It involves racial profiling -- the profiling of Arabs now, the abuse of young African-Americans. You can find intolerance anywhere in the world and lack of understanding. It's about man's inhumanity to man. We still deal with that. Apartheid lives on in it's own way."

Price went on to direct and co-author "A Class Act" and "Sally Marr ... and her escorts" on Broadway and recently staged "Urban Cowboy." He says he was never tempted to do major surgery to Fugard's play, a work that still brings him to tears every time he sees it.

"I never felt restricted to not try new things, but the play is so in my bones, so embedded in me, that I think a real revolutionary attack on it would have been hard for me. I really think plays of this quality don't need a lot of revisionism. What am I going to do? Set it in the Warsaw ghetto in 2040?"

While Price gradually left acting for directing since the play's debut, Glover translated his stage work in "Master Harold" into a thriving film career, earning roles in "Places in the Heart," "The Color Purple" and "The Royal Tenenbaums."

Though the two men only ran into each other a few times through the intervening years, both maintained a link to Fugard's work. Glover starred in a film version of the playwright's "Boesman and Lena," while Price directed an Off-Broadway production of Fugard's "Valley Song" for the Manhattan Theatre Club.

Price says by the time he and Glover reunited for the latest "Master Harold," a few ghosts continued to linger. For one thing, Glover had a tendency to accidentally refer to the director as "Hally," his old stage character.

"I kind of liked it," says Price. "It reminded me that we have this history."

So far, Fugard has kept his distance from the latest production, allowing his old collaborators room to breathe since its June 1 opening. He is due to see the show soon, and Glover and Price seem like anxious new parents awaiting the arrival of the playwright, whose play is mostly autobiographical.

"The only person I wanted to please was him. I just want to take care of the baby," says Price.

Glover agrees: "The first person I want to be proud about the work we do here is Athol."