Seventy of these quilts, with their bold colors and abstract designs, go on view at The Mobile Museum of Art beginning Monday, after a triumphant opening last November at the Whitney Museum of American Art in New York City. 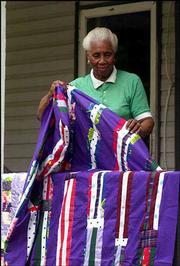 Arlonzia Pettway folds one her many quilts on the porch of her Gee's Bend, Ala., home. Pettway quilts with a group of local black women who recently gained international recognition for their quilt exhibition at the Whitney Museum in New York.

"We all knew that in the American South is some of the greatest art in American history, produced by black people so far out of the mainstream," said Atlanta art collector William Arnett, a driving force behind the show.

Gee's Bend is a predominantly black community on a remote turn of the Alabama River, about 90 miles west of Montgomery. The community of wood-frame houses with a population of about 700 is surrounded on three sides by the river, with watery loops that give it the appearance of an island.

It is so historically rural that it didn't even have paved roads until the 1960s. There are plans for an auto ferry so that residents can get to schools, hospitals and other conveniences without taking a 15-mile road to the main highway and then another 25 miles to Camden, the county seat.

Quilting has long been part of the social order, much like churchgoing in Gee's Bend, which traces its history to cotton plantations and slavery. It began as a way for women to relax from harsh and rigorous farming chores. The quilts date back to the 1920s.

Arlonzia Pettway, 80, was among a 37-member group of quilters who traveled from Gee's Bend for the Whitney opening last November.

"It takes a lot of time to get out a quilt," says Pettway, who began making quilts at 13, with her mother and two aunts. She works in a group of five quilters Monday through Thursday at the community's nutrition center.

Carolyn Ducey, curator at the International Quilt Study Center at the University of Nebraska, Lincoln, which has the world's largest quilt collection, said the Gee's Bend exhibit is the most widely known.

She said black quiltmakers in the South enjoy sharing the joys of making quilts, unconcerned about the colors or whether points on the patterns match, compared to Amish quilts, for example, which are more studied in their approach. Gee's Bend quilts have taken on an "almost mystical" quality, Ducey said, because they come from such an isolated area of the South.

The Nebraska collection includes Gee's Bend quilts and some from Tuscaloosa collector Robert Cargo in its permanent African-American collection. They will be on view in September at the Textile Museum in Washington, D.C. The Gee's Bend exhibition continues its run through 2006, ending up at the High Museum of Art in Atlanta.

Arnett said the 70 quilts in the Gee's Bend exhibit, created by 45 quilters, have gained international recognition, and he hopes the rural community that made them will eventually profit from it. While the quilts in the exhibit are not for sale, Arnett hopes people will find their way to Gee's Bend to purchase quilts still being produced.

"We hope to build a community center and museum for Gee's Bend," he said.

'Too strong for detractors'

The quilts are pieced together from fabrics the women find around their homes -- denim, corduroy, wool, printed terry cloth and synthetic scraps.

Joey Brackner, folk art expert for the Alabama Council on the Arts, said traditional quilters in the state sell their creations for $125 up to $1,000 apiece at shows he has attended, such as the Black Belt Folk Roots Festival in Eutaw in rural west Alabama.

Arnett's collection and the exhibition will make the Gee's Bend quilts more valuable, Brackner said. The quilts are owned by a nonprofit corporation, Tinwood Alliance, which has spent about $2 million acquiring and preserving them, publishing books about them and paying related expenses.

Arnett doesn't expect fame to alter the tight-knit Gee's Bend community. There are other quilt-making communities in the South, he acknowledged. But Gee's Bend's isolation makes the quilts unique.

"People will make efforts to diminish the importance of it -- that happens to everything to do with black culture," he said. But with the quilts, the "documentation is too strong for the detractors."

"The Quilts of Gee's Bend" runs in Mobile through Aug. 31.