By By Susan Kraus - Special to the Journal-World

It was a tour of serendipity. The magical moments in St. Paul's when the children's voices echoed with a clarity and purity that may only exist when singing in a 17th-century cathedral. Performing to enthusiastic applause at St. Martin in the Fields, built in 1722, and the cathedral in St. Alban's, dedicated in 1155. Sunny (and hot) weather all week long rather than the cold and rain we'd prepared for. An amazingly blue sky. Friendly people.

This London tour was an act of faith. It was initially scheduled for March 2002, but then came 9-11. It was rescheduled to depart May 26 -- and then there was the war. But it was clear to all of us that the world had changed, that "high alert" was no longer an exception but a norm. So we held our breath, hoped that nothing awful would happen and got on the plane. 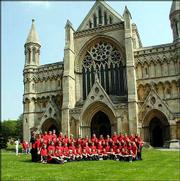 The Lawrence Children's Choir poses for a group photo in front of St. Albans Cathedral. The group spent a week in late May/early June singing at historic venues in London. The trip had been scheduled for the spring of 2002 but was put on hold after the events of Sept. 11, 2001.

The logistics were challenging. There were 85 in our core group (65 children, 20 adults), plus another 20 or so family members who came along to share in the fun. It's easy to load a large group onto chartered buses to get places, but we wanted the children to experience London more directly, not always looking from behind a window. So we secured passes for the Underground, took trains to venues and walked. Oh, did we walk!

We walked the varied turrets and towers that make up the Tower of London, to the Museum of London, St. Paul's Cathedral, then down Ludgate Street to a pub for a buffet supper. We walked to and from train stations, the stone expanses of Windsor Castle and the village below. We walked London, the parks and districts, museums and shops. We had a guided walk in St. Alban's and a "Haunted London Walk" one evening. We may have soaked throbbing feet in cold water at night, but the next day we walked. The children were troopers.

There were "free days" scheduled so that small groups of children and their chaperones could make their own choices. They saw the Globe Theatre, the British Museum, Westminster Abbey, Cabinet War Rooms, the National Gallery, the Changing of the Guard at Buckingham Palace -- even tea at Harrods in Knightsbridge. The groups studied their maps, negotiated the Tube and bus lines and created their own adventures. Getting lost was just part of the process.

As was budgeting and learning the currency. It took a tad more than $1.70 to equal a pound, yet what we got for a pound was about what we get for a dollar here at home. The kids learned quickly that a small Coke could easily cost $3. The "best deal" of the trip may have been the Internet cafes (three within a few blocks of the hotel) where kids could e-mail home for under 50 cents by sharing computer time.

Our hotel was in the Bayswater district, just across the street from Kensington Gardens and Hyde Park. It's an ethnically diverse area, and there were restaurants to prove it: Lebanese, Moroccan, Egyptian, Chinese, Japanese, Indian, Italian, French, etc. Small grocery stores had deli counters with pasties and sausage rolls, and baguettes stuffed with exotic fillings. While we had some group meals (a London pub, catered box lunches by the Thames River, a "Last Supper" in the middle of Covent Garden), most meals were open' and the kids could go where they wanted. With so many choices, many groups had more than one picnic in Kensington Gardens. Others had ethnic take-out, and the less adventurous snarfed down pizza.

There were no catastrophes. Well, there was the one kid who fell into the lake at Kensington Gardens. And another who accidentally ran into a pole at Paddington Station. A few tummy aches. A lot of sore feet. But no one stepped in front of a car going "the wrong way," and no kids were lost for more then 10 minutes.

It was over much too quickly. Just when we'd finally mastered negotiating the Tube, just as we were discovering what we'd missed and what we still wanted to do, it was time to leave. It was only a week, but it was a week of adventure, challenge, great music ... and memories.