Concord, N.H. — When Dan Brown was about 10, he found a poem under the Christmas tree that led him to a certain location in the house. Then he found an index card with a big letter "E" and another poem, which led elsewhere.

Eventually, he and his sister rounded up a group of letters -- E-C-O-P-T -- which they rearranged to spell Epcot, as in Epcot Center. A trip to the Disney theme park was their parents' Christmas gift to them. 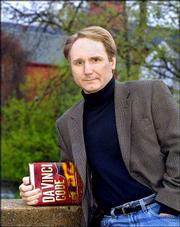 Author Dan Brown poses in his hometown of Exeter, N.H., prior to a reading from his new book "The Da Vinci Code." The volumn, Brown's fourth novel, is a mixture of code-breaking, art history, secret societies, religion and lore, all wrapped up in a fast-paced thriller.

After that, treasure hunts became a tradition every Christmas -- and Brown became a puzzle-lover.

Years later, he's written "The Da Vinci Code," his fourth novel, a mixture of code-breaking, art history, secret societies, religion and lore, all wrapped up in a fast-paced thriller that unravels in only 24 hours.

The book debuted at the top of best seller lists when it came out in March, a huge accomplishment for a relatively unknown author, and the thriller is still a strong seller.

"I think as I was writing I knew there was something special about it," Brown says. "And certainly, a few months before the book came out, I started hearing from booksellers who had read advance copies. And they were so unbelievably enthusiastic that I started to suspect that the book would do well."

It opens with a shocker: Jacques Sauniere, curator of the Louvre Museum, is shot in the Grand Gallery. As he is dying, he realizes he is the only person left to pass on an important secret. Later that night, an urgent visitor from the French equivalent of the FBI awakens Robert Langdon, a Harvard University professor visiting Paris, summoning him to the Louvre. Langdon, who studies symbols, had an appointment with Sauniere. But the curator never showed up.

It's a bizarre crime scene: Sauniere is found naked, arms and legs outstretched. Drawn on his chest in his own blood is a five-pointed star.

Many would see the symbol as something satanic, but Langdon knows that its origin is quite different -- Venus, the goddess of love and beauty.

Langdon figures out another clue: Sauniere is positioned like "The Vitruvian Man," Leonardo Da Vinci's most famous sketch. He also recalls that the curator was a scholar of all things Leonardo, and that Leonardo himself liked to hide messages in his art.

More clues are uncovered as Langdon is led to the "Mona Lisa," the "Madonna of the Rocks" and "The Last Supper." He recalls that Leonardo was part of a brotherhood that guarded an ancient secret dealing with the quest for the Holy Grail and the story of Jesus Christ. Later, he discovers that Sauniere was Leonardo's modern-day counterpart.

Langdon becomes a murder suspect, and the curator's granddaughter, Sophie, a gifted cryptologist for the French police, goes on the lam with him. She believes her grandfather left the clues for her to solve. With the police on their trail, the pair races to pursue clues. Others are in pursuit, too.

Readers learn about early religious beliefs -- especially goddess worship and how it vanished through the years.

"In the early days ..., we lived in a world of gods and goddesses," Brown says. "Every Mars had an Athena. The god of war had the goddess of beauty; in the Egyptian tradition, Osiris and Isis. ... And now we live in a world solely of gods. The female counterpart has been erased.

"It's interesting to note that the word 'god' conjures power and awe, while the word 'goddess' sounds imaginary."

Minus the characters and story line, the book is based on historical fact. "All descriptions of artwork, architecture, documents and secret rituals" are accurate, Brown says at the outset. He spent two years researching and writing the book, including two weeks in Paris at the Louvre. He also made trips to England and Rome. He has an extensive bibliography on his Web site, as well as photos of him at key places mentioned in the story.

For scenes in the Louvre, he talked to art historians and a security specialist. His wife, Blythe, an art historian, helped him with the writing and research.

He also called on knowledge gleaned earlier in his life. For example, Brown first learned about Leonardo's hidden messages in artwork when he was a graduate student studying art history at the University of Seville, Spain.

Brown's story, however, has been challenged by author Lewis Perdue, who says his thriller, "Daughter of God," has similar themes and characters. Perdue, whose book was published in 2000, pointed out the similarities to Doubleday, Brown's publisher. Brown said he's never heard of Perdue, and he hasn't read any of his books.

Brown was born in New Hampshire and lives there, but closely guards the location of his home. His father is a mathematician and his mother is a specialist in sacred music. He did his undergraduate work at Amherst College.

A real-life event led him to write his first novel, "Digital Fortress," delving into the secretive National Security Agency. A student at Phillips Exeter Academy, where Brown used to teach, was questioned by the government after sending a private e-mail in which he threatened President Clinton. That led Brown to question people's privacy and government intervention.

Brown knew religious themes of "The Da Vinci Code" might be provocative.

"There are some people in the church for whom this book is a little bit shocking," Brown says. But the reaction from the vast majority of clergy and Christian scholars has been positive.

"Nuns, in particular, are exceptionally excited about the strong feminist message of the book," he says.

This is the second book featuring Langdon, who explored a secret society that was an enemy of the Vatican in "Angels and Demons."

"Langdon is the man I wish I were," says Brown. "Langdon is significantly cooler than I am. One of the luxuries of being a writer is that you can live vicariously through your characters."

Langdon returns in Brown's next novel, which is set in Washington, D.C.

"My next three books, at least, will have Robert Langdon, because he interests me and also because I'm contractually obliged," he says with a laugh.