Important characters in the Harry Potter books by J.K. Rowling: 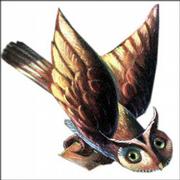 Orphan. Wizard. An unerring knack for getting caught up in whatever trouble there is to be found. The son of Lily and James Potter, Harry was sent to live with his aunt and uncle after his parents were murdered by the evil wizard Lord Voldemort. At Hogwarts School of Witchcraft and Wizardry, which he has attended since he was 11, Harry is a member of Gryffindor house, where he plays on the Quidditch team. He's played by Daniel Radcliffe, pictured above right, in the Harry Potter movies.

Ron is one of Harry's best friends at Hogwarts, and also a Gryffindor. Tall, with red hair and freckles, his talent for wizard chess helped defeat one of Voldemort's early plots. He is sometimes envious of Harry's fame, and is embarrassed by his family's lack of wealth.

This Gryffindor, Harry's other best friend, is by far the smartest student of her year. With bushy hair and formerly large teeth (she had them shrunk in Book 4), Hermione can sometimes be a know-it-all but is always a good friend to Harry. A romance between Hermione and Ron might be developing. She's played by Emma Watson, pictured above left, in the Harry Potter movies.

Head of Hogwarts. Dumbledore is reputed to be the only wizard Voldemort actually fears. Tall, with a long white beard, bright blue eyes and a long, crooked nose, Dumbledore has been involved in Harry's life from the beginning. At the end of Book 4, Dumbledore was rallying forces to fight Voldemort.

The most evil wizard of recent time, Voldemort had instituted a reign of terror in the magical world. He and his supporters, the Death-Eaters, were responsible for the torturing and killing of many, which stopped the night he went after the Potters. Harry has learned that Voldemort was once Tom Riddle, a student at Hogwarts many years ago in Slytherin House.

Keeper of the Keys at Hogwarts and recently a professor of the care of magical creatures. It was Hagrid, larger-than-life thanks to his giant mother, who turned up on Harry's 11th birthday to tell him about his past. A former Hogwarts student, he had been kicked out after he had been framed for crimes committed by Tom Riddle. He's besotted by dangerous animals, the more terrifying, the better. In Harry's first year, Hagrid kept an illegal dragon, a menacing little Norwegian Ridgeback named Norbert. Since then, he's come up with Blast-Ended Skrewts, crawly little things that grow to huge heights with stings and blood suckers.

The pale, blond Malfoy is Harry's most detested enemy, at least among Hogwarts students. He's a member of Slytherin House, which generated many of Voldemort's followers. Malfoy considers himself superior to many students, because he comes from one of the oldest pureblood wizarding families. He constantly makes fun of Ron for his family's poverty. Harry has disliked him from the moment they first met. Malfoy hangs out with his cronies, the oafish Crabbe and Goyle.