The fifth book in J.K. Rowling's successful "Harry Potter" series, "Harry Potter and the Order of the Phoenix," will be released Saturday in stores (in some cases, at 12:01 a.m.). The book is hefty -- 896 pages (a hardcover copy is 3 pounds) and costs approximately $18, although that depends where you purchase it.

Brush up on your Harry Potter smarts with what's been happening in the first four books: 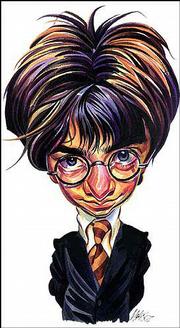 Welcome to the world of Harry Potter, a young English orphan with bright green eyes, unruly black hair and an odd scar on his forehead shaped like a lightning bolt.

Harry, whose parents died when he was 1, lives with the Dursleys -- his odious aunt and uncle and their bully of a son -- who tell him that his scar is a legacy of the car crash that killed his parents.

But on his 11th birthday, Harry gets a visit from Hagrid, groundskeeper at Hogwarts School of Witchcraft and Wizardry, and learns the truth: His parents were a witch and wizard. They were killed by the most evil wizard in the world, Lord Voldemort, who tried to kill Harry when he murdered Harry's parents. But Voldemort's curse rebounded, weakening him and leaving Harry with the scar.

Harry goes off to Hogwarts to study wizardry for the first of seven years. He makes friends with Ronald Weasley, Hermione Granger and headmaster Albus Dumbledore, and draws as his enemies Draco Malfoy and Professor Severus Snape.

He learns many wizardry secrets -- from playing Quidditch to transfiguration spells. But he also learns something else -- that Voldemort is not dead but alive in spirit, and is on the hunt to regain his physical form.

Voldemort has taken over the body of young Professor Quirrell, and is looking for the Sorcerer's Stone, which he needs to make a potion that will prolong his life. Harry and his friends thwart Voldemort, and the evil wizard's spirit flees to plot another day.

It's the end of summer, and Harry is at home with the Dursleys. He's feeling a bit lonely, wondering why he hasn't heard from any of his friends. The reason is revealed by a weird visitor, Dobby the house-elf, who is enslaved by the Malfoy family.

With his batlike ears and huge eyes, Dobby has sneaked away from the Malfoys to warn Harry that he is in much danger and must not return to Hogwarts. Dobby has been blocking Harry's mail to make the young wizard think that his friends don't like him anymore.

But Harry returns to Hogwarts anyway -- in a flying car with Ron.

Things are weird at Hogwarts -- and dangerous. Harry hears voices that no one else can, and people start turning up in a petrified state. The hidden Chamber of Secrets has been opened, and a monster is attacking students who come from nonmagical families.

Harry and his friends discover they're dealing with an old mystery, and when Ginny Weasley, Ron's younger sister, disappears, Harry finds the entrance to the Chamber of Secrets and goes to look for her.

What he finds is the spirit of young Tom Riddle, an old Hogwarts student who put his spirit in Ginny's diary. Riddle's spirit takes a keen interest in Harry, who learns it was Riddle who ultimately became Voldemort.

Harry defeats the spirit by destroying the diary. And before returning home, he engineers Dobby's freedom from the Malfoys.

"Harry Potter and the Prisoner of Azkaban" -- September 1999

Harry is on his best behavior at the Dursley home, hoping he'll be able to get his awful uncle to sign a permission slip for school field trips. He promises not to annoy Uncle Vernon's horrible sister during her visit. But she's so horrible that Harry blows her up like a balloon before fleeing the house.

Harry expects to be punished by Hogwarts because he has used magic around the nonmagical. Instead, he is sent to an inn to wait out the rest of his vacation. On the eve of his return to Hogwarts, he finds out why: Sirius Black, an alleged supporter of Voldemort, has escaped from Azkaban, a prison for wizards and witches. Everyone is worried that he's on his way to Hogwarts to finish off Harry.

It's a tense year at Hogwarts, with new, scary guards and more classes for Harry and friends. Harry also thinks he sees omens of death.

Black finally shows up. But it's not Harry he's after -- it's Scabbers, Ron's pet rat. Scabbers is actually a transfigured Peter Pettigrew, a Voldemort follower who committed the crime for which Black was wrongly imprisoned. And it was Pettigrew who told Voldemort where he could find Harry's parents all those years ago.

With Pettigrew back in human form, hopes are high that Black will be exonerated. Black is actually Harry's godfather and offers him a home away from the Dursleys. But Pettigrew escapes, and Black has to go on the lam to avoid being sent back to jail.

As for Harry, he returns home to the horrible Dursleys.

Book 4 opens with the story of how the aloof, obnoxious Riddle family died.

Then the scene shifts to Voldemort, whose original name was Riddle. Voldemort has met up with Pettigrew and is hatching another plot to bring himself back to a physical form and full power. The plot requires blood and death -- preferably Harry's. An evil minion at Hogwarts is in place to help the wizard get his hands on Harry when the time comes.

Harry, meanwhile, has joined Ron and his family at the Quidditch World Cup finals. Once back at Hogwarts, Harry is entered in a dangerous magical competition with two other wizard schools. He survives, but another Hogwarts competitor doesn't.

Harry ends up temporarily in Voldemort's clutches, although the evil wizard's plan doesn't go quite as he had hoped. Harry and Voldemort end up in a duel, and the ghostly forms of those Voldemort has killed come back to aid Harry and help him get away.

Once back at school, the minion is revealed, and Dumbledore realizes that Voldemort is again ready to cause trouble. Dumbledore tries to persuade the Minister of Magic to take steps to stop the evil wizard, but the minister refuses to believe him. So Dumbledore starts making preparations of his own to combat the battle he anticipates.

Harry and company leave Hogwarts at the start of summer knowing they will soon face a fight.