Los Angeles — In a little more than two years, Nickelodeon's "Dora the Explorer" has vaulted past "Blues Clues" to become the most popular show on cable or commercial broadcast television among preschoolers. And with a national tour under way, it could get bigger still.

"When 'Blues Clues' hit its high-water mark," Nickelodeon Executive Vice President Cyma Zarghami said, "it had been on the air six years, versus three for 'Dora,' and had three years of live touring. ... 'Dora' looks like it's going to be huge." 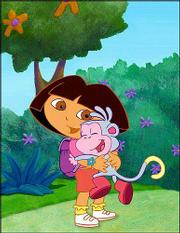 Dora, left, gets a hug from Boots in this frame from Nickelodeon's animated cartoon "Dora the Explorer." The show featuring the 7-year-old bilingual adventurer airs at 9 a.m. and 10 a.m. daily on Nickelodeon, Sunflower Broadband Channel 37.

Perhaps most surprising, though, is that the show, which airs 9 a.m. and 10 a.m. on Nickelodeon, is also a hit with children 6 to 11 years old -- an audience generally thought of as too old and too self-consciously cool to be caught shouting back at the television, answering questions and uncovering clues to mysteries.

To Kathleen Herles, the 12-year-old bilingual actress who voices Dora, such widespread appeal is not surprising. Dora is simply too sweet, she said, not to be liked by everyone.

"She's nice, she's playful and she helps a lot of people," Kathleen said.

And Dora never panics, not even when she loses her beloved bear Osito, as she did in one episode.

But after all, said Nickelodeon executive Brown Johnson, who worked to put the show on the air, Dora -- a 7-year-old bilingual adventurer who inhabits a cartoon universe somewhere in Latin America -- is a pint-sized Indiana Jones. She is fearless in the face of adversity. She can offer solutions to problems in math, geography or any other subject in both English and Spanish, and sometimes a combination.

In the giving-advice department, Johnson acknowledges the show is as traditional as the long-running "Mr. Rogers Neighborhood" was.