By By Levi Chronister / lawrence.com 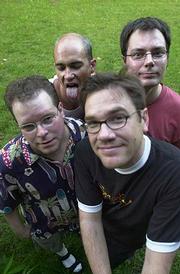 The band's sense of humor even extends to its erratic show schedule.

"Let's get this straight," said guitarist Andy Morton. "It's not a reunion -- it's the second leg of the farewell tour."

While the band member's humor is unquestionable, the semi-regular party favors -- which were often thrown back at the band during past shows -- are still in doubt.

"I think we're going to give out throwing stars," singer Karl Michelbach said.

The first leg of the Lawrence alt-pop quartet's 'farewell tour' was in May 2001, both as a reunion and for bassist Jason Lovell's graduation from Washburn University.

"It seemed like everybody really needed it," Michelbach said of the 2001 shows. "We hadn't seen each other for a long time, and it was a reunion of sorts for four friends."

That pair of concerts came two years after the band had released its third full-length album, "Girls of the Big 12" (no relation to the Playboy spread of the same name) and split up a month later.

Lovell and Morton stayed in the Lawrence and Kansas City area, Michelbach moved around the country and drummer Kenny Gall went to Austin, Texas, with his other band, The Playthings, and started a free-lance photography career.

With Morton on pace to earn an English degree from Kansas University in May, he started harassing Michelbach in late March to get the band together again on stage.

"Originally, we wanted to do it for graduation," Morton said, "but Karl said we needed another month to get ready, and we still haven't picked up our instruments."

The long road to maturity
Known for quirky, pop-culture-referencing lyrics, the members of Danger Bob have matured a bit in their off-stage lives since the 2001 shows.

Besides Morton finally earning his degree, Lovell is now an accountant for State Street Financial Co. in Kansas City, and Gall is continuing his photography career in Austin.

After living in California, Minnesota and Arizona, Michelbach moved to Kansas City more than a year ago and now works for Youth Champions, a company specializing in karate and cheerleading for children. Or, as Morton puts it, Michelbach "helps put outfits on cheerleaders for big events."

Then again, maybe they haven't matured much.

Michelbach, who formed the now-defunct Tiny Dot Syndrome after returning to the area, has been working on a solo project that includes some of that band's songs.

"I've been keeping one foot in it, turtle-like recording a full-length," he said. "I asked Andy to do some guitar acrobatics on it."

"I just say (that means) you'll be able to sell one more. 'Andy, you're on it, you've got to buy one,'" Lovell countered.

Though he doesn't go out much anymore, Michelbach has spent some evenings out with Morton, giving the pair the opportunity to come up with ulterior motives for this weekend's shows.

"Karl only goes out about six times a year," Morton said, "and that's usually with me. We thought, 'There's got to be a better way of doing this, where we don't have to pay for our drinks.'"

Playing for themselves
While the Rolling Rocks and Jagermeister shots are sure to be plentiful, there will be one usual on-stage component missing this weekend.

"We know we're not using pyro(technics), because one band went and ruined it for everybody," Morton said, referencing a Great White show in February in Rhode Island where nearly 100 people died in a fire started by the band's fireworks.

Danger Bob's most popular songs -- including "The Hook," "Diarrhetics" and "Sick and Tired of Sex" -- are sure to make an appearence, as might some lesser-known songs.

Though the set list is still being argued about, the band said they expected to play some songs that the audience wouldn't expect to hear -- or even want to, necessarily.

"We'd like to give people a chance to go to the bathroom, refresh their drinks and feel like they didn't miss anything," Morton joked. "Play 'The Hook' first and let them all sort it out after. We're not above doing that."

The set list isn't the only unknown going into this weekend, as the band is keeping Saturday's opening act a secret to the general public. Brannock Device was the original opener, but had to cancel and Morton will only say that Saturday's new opener is "a touring national act."

At least Danger Bob knows who's opening at The Bottleneck. The band isn't sure who it's playing with Friday.

"We bullied our way onto the bill," Morton said.

"It's just going to be two more bands that really hate us," Michelbach added.

From Wannabees to Has-Beens
While Michelbach did admit Danger Bob spent a lot of time purposely ticking off other bands in its first two or three years, the band spent just as much time messing with each other.

Some of that harassment will be documented in "Incredidumb: From Wannabees to Has-Beens -- The Danger Bob Story," a book of stories from the band's career from 1992 to 1999. The book will be for sale at both shows.

"It's a whole lot of shit-talking," Morton said. "It covers all the songs that we recorded, almost all the ones we didn't record, the ones we threw away because they were terrible. It's a last-ditch effort to reach some sort of catharsis by justifying everything we ever did."

Plans for a live album to sell at the shows fell through, but Morton thinks the book makes more sense.

"It was the next logical move because our fans don't rock out anymore. They sit at home and read," he said. "If we put it on CD-ROMs, we'd be millionaires."

Though "Incredidumb" is the band's first foray into print, it's not the first book to be available at one of their shows.

"Andy somehow got two free cases of "Mutiny on the Bounty," and we gave just about everybody who came in The Bottleneck a copy," Michelbach said of one show. "I think it was Jason who uttered the line, 'It's the hardcover edition. Watch your heads.'"

Aging gracefully?
Being two years closer to middle age than the last time they played together, Danger Bob's members aren't too worried about being ready for this weekend. Michelbach has kept his voice in shape with Tiny Dot Syndrome, but Morton is a little concerned with his ability to keep up.

"The bones are a little stiff these days," he said. "I was practicing the other day and thought, 'We're going to have to slow some of these down.'"

Come hell or high blood pressure, the band couldn't say whether this will be the final leg of its farewell tour.

"The last one I almost felt like was the finale, but I'm not approaching this one as a finale," Lovell said. "Though the reasons I wanted to stop playing haven't gone away."

"This will be the last one ever," Michelbach said.

"Until the next time," Morton countered. "Until Karl's on the wagon, the possibility of shows is endless."