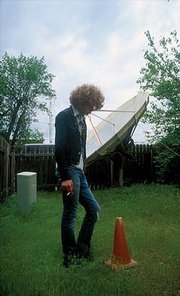 "I was thinking we might relocate the interview," says Patrick Clendenin. "To the Burroughs estate."

The 18-year-old Clendenin explains that the trip to the legendary writer's (estate holder's) home "should be cool" with owner James Grauerholz, Burroughs' friend and manager whom Clendenin befriended at a party.

"I thought you'd enjoy a change of pace," says Clendenin, as we drive to the little red bungalow in East Lawrence where Burroughs wrote his memoirs and dined with such friends as Kurt Cobain and Hunter S. Thompson.

When we arrive, Clendenin ventures through the gate and searches for Grauerholz. He's nowhere to be found. A rowdy group of drunken twenty-somethings sips martinis in the hot tub next to the pool. They lend their inebriated approval to our interview, and we settle into a poolside table. As the tape recorder begins rolling, we are temporarily distracted by a loud, slurring holler: "No, I don't want to drink Red Bull! I want to drink beer!" A bare bottom shines through the dark night as a hot-tubber towels off.

Golden boy
In the past year, Patrick Clendenin's bands have opened for indie-rock heavyweights like the Shins and The Anniversary. Off stage, you may have seen him working the checkout at Arizona Trading Company, or scooting around town on his baby blue Vespa.

"They make the finest scooters in the world," he says. "And they're romantic."

The vintage Italian scooter is a fitting vehicle for the crush-worthy pop singer, whose lighthearted songs often sound like they were culled straight from the Donovan songbook. In "Blush" Clendenin croons: "You're my lucky lady / You're my golden boy / You're my wild child / I wanna be your toy."

"I'm a strong believer in instant gratification --- music and art that isn't too sophisticated for anyone to understand or appreciate," Clendenin says. "I've never spent a lot of time studying lyrics."

Clendenin's buoyant solo work is a far cry from the morose shades of Clockwork, a band he was part of while at Lawrence High School formed with friends Jim Piller and Hugh Naughtin. 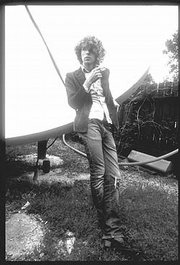 "I love it," says mother Lynn Anderson of Clendenin's pop output. "Clockwork was all about I.V.'s, gurneys, darkness and death."

In both bands, Clendenin exercises a flair for the dramatic -- no surprise considering he taught himself piano because he wanted to write songs for theater. Performing came naturally to the teenager, who developed an interest in magic and the circus in junior high. As a ten-year-old, he enjoyed a short-lived career performing in retirement homes.

"I would have volunteers from the audience tie chains around my ankles and my arms and my wrists and I'd get inside of a little chest and squirm," Clendenin recalls.

"I had no tricks or anything. I would squirm until I was out of all the ropes and pop out of the chest and they were amazed."

The young lad also amazed his friends and family with a torch-juggling routine, a talent he says won't be revived anytime soon.

"Great White kind of ruined my bit," he jokes.

Blush
Clockwork first caught the attention of show promoter Jacki Becker in a Lawrence Journal-World article that covered Clockwork's victory in the Lawrence High School 2001 Battle of the Bands.

Becker contacted the band and helped them secure their first show at The Bottleneck, opening for Los Angeles-based indie rocker John Vanderslice.

"I was nervous as hell," Clendenin confesses. "I never really imagined performing at the Bottleneck because I was used to it from the perspective of a spectator."

The performance introduced Clockwork to a larger and more mature local audience, but nearly alienated them from their peers at Lawrence High.

"People didn't really like us because we would always be advertising for shows at the Bottleneck," Clendenin recalls.

"When you're in high school, most people play at parties and barns." 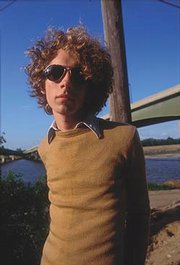 The exposure paid off. Clockwork earned more high-profile gigs with the Shins and Omaha band Son, Ambulance. Their song "I Am Your King" became a minor hit on KJHK, receiving as many as 10 spins a week alongside local bands four years their elder.

Though Clockwork's sound recalled the somber strains of Radiohead, Clendenin was also drawn to the simple grace of folk performers like Bob Dylan and Joan Baez.

That passion translated into a batch of songs that didn't seem to fit within the context of Clockwork.

"I've always been a lot more fascinated with song structures and the art of pop songwriting," Clendenin says. "I'd like people to walk away feeling like they want to listen to all the songs again, immediately."

So Clendenin assembled a ragtag group of musician friends and began performing under the "Clendenin" moniker. With an ever-revolving cast that included brother Andrew Roberts (Clendenin is Patrick's middle name) and Clockwork drummer Jim Pillar, Clendenin recorded the "Three Love Songs" EP and opened shows for Mates of State, the Anniversary and the Decemberists.

Part with a kiss
As quickly as his local profile did rise, however, Clendenin will be leaving Lawrence in August to study art at The Cooper Union in the East Village of New York. He earned a spot in the prestigious school (which provides full-ride scholarships to all its students) on the strength of his high school work, including a creative piece on "surveillance" that found him reading poetry into Lawrence High surveillance cameras.

"I'm going to miss him so much," his mom says. "I don't know another human being whose creativity is so boundless."

For all the culture Lawrence has provided him, Clendenin bemoans the absence of an all-ages music club.

"I might know half a dozen kids who would be aware of a local indie rock scene," he says.

"If Lawrence would provide a more hospitable environment for really young kids then I think you'd see a lot more people who are 18 and 19 writing brilliant music."

But for all he did in his 18 years in Lawrence, there was one opportunity Clendenin never had: meeting William S. Burroughs.

"I was too young and sheltered," he laughs. "Maybe fortunately."