Bill Faber/Special to the Journal-World

Lawrence's hardaways re-create the famous 1969 album cover to The Beatles' "Abbey Road" in front of The Replay Lounge at 10th and Mass.

It was the last album The Beatles ever recorded, and they never performed its songs before an audience.

Now a Lawrence act will pay tribute to the world's greatest band by covering "Abbey Road" in its entirety.

"I've heard other bands talk about it before, but I've never seen anybody play it live," says Andy Bricker, drummer of The Hardaways.

At 11:30 p.m. Thursday, the group will appear at The Replay Lounge and lovingly interpret all 44 minutes and nine seconds of the classic record. 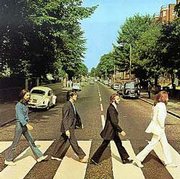 "We've always learned a cover or two here and there, but we're an original band, not a cover band," says Bricker, who joins bassist Ron Raney and pianist Jeff Ferrell in the ensemble.

"We've been talking about it for a couple of years, pretty much ever since (forming in 1999). We always thought that side two of 'Abbey Road' was just the best side of any rock record ever, especially as it gets going toward the end with 'Mean Mr. Mustard' and 'Polythene Pam' one right after another."

It's that second side that offers the most challenges, with its bravura medley of styles -- a fitting coda to the supergroup's storied career.

"We try to keep the spacing as close to the album as we can," he says. "We got a little percussion instrument that makes cricket noises to use before 'Sun King.' And we bought a 60-pound anvil for 'Maxwell's Silver Hammer.' We've got our bases covered as well as we can without having some serious financial backing."

The Hardaways first became serious about tackling the 1969 masterpiece after a friend of a friend heard the members kicking around the idea and asked them to perform it at his wedding reception.

"It gave us six months to learn it in our off-practices," Bricker recalls. "We got side two learned and played it. Then right after that The Replay called and offered us a gig. We decided to finish the job and do the whole thing."

With the wedding show a success, the band continued its quest to follow in The Beatles' footsteps by also re-creating the famous album cover.

"That was what got us even more excited about it, because it seemed like it could become an event," recalls Bricker of the shoot.

In a stroke of eerie convenience, the photo was staged at the crosswalk right in front of The Replay at 10th and Mass. The band gathered at 7:30 one morning to take advantage of the minimal traffic. All that was needed were the various wardrobe items, from John Lennon's white suit to the coat and tails of Ringo Starr. (Remember all the rumors that the outfits symbolized a funeral procession, with Paul McCartney as the deceased?)

One notable absence from the original photo was the conspicuous Volkswagen Beetle with the license plate "28IF."

"We didn't know anybody with a Beetle, so we thought about parking our band van there," Bricker says. "But the tags were expired."

One of the reasons The Hardaways are able to even attempt such a musically complicated feat is that they're one of the few area rock acts that hauls a baby grand piano to every show. Pianist Ferrell handles the medley transitions of "Abbey Road" by keeping a guitar strapped on him at all times, which allows him to immediately switch between instruments.

But even The Hardaways were compelled to go to the melodic bullpen for this project.

"We're a trio, so we brought in Matt Rice," Bricker says of the singer/guitarist who they met working at a liquor store. "He's sort of a ringer with his voice. We recruited him to do this for some of the higher stuff."

This lineup allows the band to pull off the complex four-part harmonies that help simulate the Fab Four's studio layering.

"We've only done side two live once, and I think 'Because' was the hardest. It's the one with all the pretty harmonies," Bricker evaluates. "So was 'Sun King.' Some of the more rockin' ones that are more fun to play aren't near as hard as they sound live."

So how will The Replay -- known more for its buzzing guitars and indie hipster attitude -- respond to hearing four-part harmonies and hippie-era songs?

"The Replay is cool about letting musicians try whatever they want to," he says. "It's definitely our favorite venue to play because usually people who are there pay attention to the music."

Perhaps even the stragglers who wander into the back of the club on Thursday will be smart enough to figure out that what they're listening to isn't just the jukebox.