An age of magnificence

Edouard Manet's "The Cafe-Concert" shows a handful of people in a crowded Parisian cafe on the Boulevard Rochechouart.

The cafe-goers appear aloof, each looking in a different direction. Art historians have different ideas about what the French painter meant to convey by the lack of interaction. Whatever mood or condition Manet intended to communicate, what comes through without ambiguity is the "typicalness" of the scene. 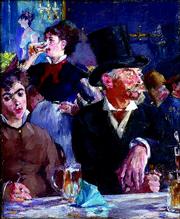 "The Cafe-Concert" by Edouard Manet.

Manet created the Impressionist-style painting, often considered his best, in the late 19th century, a time when the Industrial Revolution was pumping wealth into the pockets of the middle class. Suddenly, a new group of people had more leisure time to gather at such cafes -- and more money to buy art.

But "The middle classes weren't that intellectual. They wanted pictures that were nice to look at and entertaining," says Ian Kennedy, the Louis L. and Adelaide C. Ward Curator of European Painting and Sculpture at the Nelson-Atkins Museum of Art.

So artists responded with what some regard as easily digestible paintings in a wide variety of styles, from Impressionism to realism, Neoclassicism to romanticism.

A new exhibition opening Saturday at the Nelson, "A Magnificent Age: French Paintings from the Walter's Art Museum," showcases the depth and diversity that has come to characterize the transformational 19th century. What's uncharacteristic about the exhibition is its single origin: the collection of father and son William and Henry Walter, which is housed at the Walters Art Museum in Baltimore.

"This collection is great because it's survived in tact, whereas a lot of other collections like this have been dispersed," Kennedy says.

Besides showing how artists of the time responded to the world around them, the exhibition also illustrates the tastes of 19th-century collectors -- slightly conservative, definitely not cutting-edge, Kennedy says.

"The Duel after the Masquerade" by Jean-Leon GerÃ'me.

Another important component of the exhibition, which will be on view Saturday through Sept. 7, is that it includes paintings and a few three-dimensional artworks unlike any of the Nelson's holdings. For example, Kennedy says, the museum has nothing like the Neoclassical Jean-Leon GerÃ'me paintings depicting the ancient world, though his "The Christian Martyrs' Last Prayers" is rather well-known.

"I just like the idea that this exhibition does have pictures of a type which are not familiar to people in Kansas City or the region," Kennedy says.

Other trends represented in the exhibition include the academic Neoclassicism of Jean-August-Dominique Ingres and Alma Tadema; the romanticism of Eugene Delacroix and the Orientalists; the realism of the Barbizon School and Jean-FranÃ§ois Millet; and the Impressionism of Claude Monet, Edgar Degas, Camille Pissarro and Alfred Sisley.

In the 1800s, the works of these artists would have been shows salon style, stacked several paintings high and hung close together on a wall. They're displayed similarly at the Walter Art Museum to recreate that feel.

Kennedy has decided, however, to space out the paintings for the Nelson show "to make them more accessible to people who aren't familiar with them."

Patrons of 19th-century salons treated the works like movies, long lingering over single images. Perhaps visitors to the Nelson will do the same.