Building a house of paper

Lawrence Artist Juniper Tangpuz utilizes his smallest paper scraps to create imaginary creatures like this digging insect which has a sensory antenna and a blade-like weapon attached to its head. And the goggles he's wearing? He made those from paper, too.

There aren't many apartments in town like that of artist Juniper Tangpuz.

Inside you'll find small animals, a fiddle, furniture and even a large spider - and they're all made of paper.

"I don't want to stop until this whole place is filled with paper," he says.

Tangpuz, 26, is effectively turning his one-bedroom apartment in the 1000 block of Emery Road into a museum of his work. His living room, dining area, entryway, kitchen and bedroom are all filled with his art, much of which hangs on the walls or sits on pedestals with traditional museum title cards nearby.

"I'm a huge fan of any museum," he says. "Museums are kind of like sacred places to me It's kind of like going to church."

He works almost exclusively with paper-based materials, a medium he finds appealing because of its endless possibilities. He also films many of his projects to preserve them for posterity.

"Paper has such a weird life span, so I've also filmed everything so people can see how it works and how it was done," he says. He realizes that, because his works are paper-based, they won't be around forever, but he doesn't mind their lack of longevity just the fact that they existed at all is important enough.

Tangpuz, also known as T.J., plans and drafts extensively before cutting, folding and gluing his paper creations. He frequently uses a bone folder (similar to a stylus, he says) which helps fold the paper cleanly.

"I've also started making templates for a lot of the work, in case I ever want to replicate it," he says.

One of the first things you see entering his apartment is a piece called "Horse Head," a scaled-down sculpture of an equine head that, when gently petted on the snout, nods up and down receptively the way a real horse might.

Nearby sits one of several pop-up books Tangpuz has created, this one titled "Mad Squirrel in 'The Senseless Caper.'" He acknowledges that pop-ups are generally aimed at children, but his definitely aren't for the kiddie scene. They contain their fair share of low-brow humor, and they're darker and edgier than what one might expect to find in a pop-up book.

Tangpuz says "Senseless Caper," from 1997, was the first 3-Dimensional piece he did, and that doing the pop-ups allows him to experience the best of both worlds. 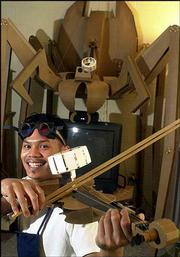 Artist Juniper Tangpuz loves to integrate art and life -- especially in his personal living space. Tangpuz, a recent Kansas University graduate from Kansas City, Mo., is shown playing his handmade zoetrope (moving picture device) in his living room while a sculpture called "Fiddle Back" looms above his television. Both sculptures are made from paper materials.

"With the pop-ups, I have to draw it all out, but I still get to build it and make something three-dimensional," he said.

Tangpuz has been making art for nearly 20 years since before kindergarten and he has been working with comics on the side since 1996. He has drawn comic strips, published one full-length comic book and is in the midst of working on another, though he says that work often gets sidelined as he works on larger projects.

He describes both his parents as workaholics, a trait he says he has inherited.

"I try to go to bed around 1:30 or so, but sometimes I find myself still up at three or four a.m.," he said. "After a while, it starts to get hard to put the knife or pencil down."

Tangpuz is small and wiry, of Filipino descent, with a thin mustache. In conversation he is quiet and attentive, but he speaks about his work in bursts of spastic energy, as though he can't wait to show it off.

One project that looms large for him, both physically and otherwise, is "Fiddle Back," which is literally the centerpiece of his living room.

Made entirely of cardboard and recycled materials like core tubes, "Fiddle Back" is a giant paper sculpture spider that frames his TV and entertainment center. The piece is roughly 4 feet wide and more than 6 feet tall, and Tangpuz says it means a lot to him. 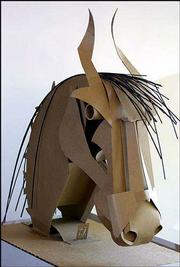 The head on Tangpuz' "Horse Head" sculpture bobs when its nose is touched.

"The spider was my first big paper project," he says. "It took me about a month and a half to get it all done."

Some of his art even serves a useful, common-household purpose, such as the fully functional paper chair he created, which he sat on throughout a recent interview. The chair, like "Fiddle Back," is made of cardboard and recyclables, standing with a base made of a multitude of core tubes.

A few days after the interview, the chair broke, but Tangpuz says, "It was only a prototype."

He isn't daunted by the chair's collapse. In fact, it's something of a motivation. He knows his paper works are ephemeral, and, in a way, that's the point.

"I really want to throw out some new ideas about art," he says.

Judith McCrea, chairwoman of Kansas University's art department, bought some of Tangpuz's work at a student art sale. She says he's an original at KU, doing a style of work completely different from many of his colleagues.

"It's extremely unique," she says. "He has a very well-informed aesthetic, and he's knowledgeable of contemporary art. But, in addition to that, he has a highly individual sensibility."

She continues: "I think its important that his work is beautiful and thoughtful, and it's particularly important that it's made out of what is traditionally considered an ignoble material that's commonly available."

"It's all a huge exploration," Tangpuz says. "Some people understand it, and some don't. I like being curious about an idea and exploring it."

That sense of exploration has been a driving force behind Tangpuz's artistry.

"There's not really a class that can teach you the paper sculpture stuff," he says.

McCrea says the size and variety of Tangpuz's work is what makes it so impressive and exciting.

"It can all be quite large-scale and imposing, but it can also be folded up and transported very easily, so there's a component of accessibility to it," she says. "But once set up, it has a very strong presence."

Tangpuz capped off his final year of undergraduate work in April, with a two-week exhibition in the Kansas Union art gallery.

One of the pieces featured in the show was "Animation Machine No. 1," a piece he calls "an homage to the art of animation."

"Machine" is a zoetrope, an old-fashioned animation machine from the early 1900s, turned on its side. As the air from an electric fan turns the machine, a light shines on the inside. Look through the spokes of the machine, and the light illuminates an animated seascape, complete with crashing waves.

"It's fun because I can draw the schematics and build the machine to drive the animation," he says. "I like linking those two worlds together of 2- and 3-dimensional."

Tangpuz says his goal is ultimately to sell art to support himself. He's only made one sale so far, but as word-of-mouth travels about his museum-apartment, that could easily change.

He gives tours of his apartment by appointment. He once even brought an art class in for a demonstration project.

He views his living space almost as art in itself, using the museum concept as a total installation project unifying the work. He enjoys having people see the work, but is understandably a bit apprehensive bringing outsiders into his private home museum.

"It's kind of tough because this is where I live."