Lucinda Williams tries to enjoy fruits of her labor

New York — It's morning for Lucinda Williams. Actually, it's 4:30 in the afternoon. But that's early when you were drinking with Ryan Adams and other pals until 6 a.m.

John Coltrane is playing on the hotel room stereo, and the bed is unmade. 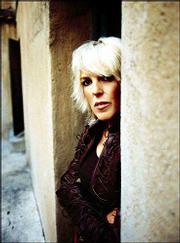 Williams is living the rock 'n' roll life, even at age 50. There's a new tattoo, a buff body toned by boxing class. She's arguably at the peak of her musical powers, having just earned an enthusiastic thumbs-up from her toughest critic -- her dad.

It's not an easy question.

"Sometimes we have a hard time feeling OK about having good things come to us," she said. "You have to feel like you deserve it. You have to get used to it."

Williams is two years removed from being labeled America's best songwriter by Time magazine -- the kind of weighty accolade that could either boost confidence or paralyze with pressure.

For Williams, it was a confidence-raiser that's evident in the grooves of "World Without Tears," her latest disc and most varied, adventurous work.

Williams' music has always been an uncategorizable mix of country, folk, rock and blues. Here, she stretches even those boundaries with some half-spoken, half-sung numbers that are almost blues-rap, some gutbucket blues, a show-stopping rocker and country ballads that could have been written for Patsy Cline.

Glowing reviews, she's used to that. What she hadn't received before was an unqualified thumbs-up from her father, poet Miller Williams. Whenever she completes an album, daughter sends a copy of the lyrics to dad and always gets a marked-up copy in return.

"He didn't have any criticisms -- not one single one, which was a first," she said proudly. "It made me feel great. I said, 'Does that mean I've graduated?"'

Dad's response: "This is the closest thing to poetry that you've done."

Williams has always been a meticulous writer, constantly looking for the perfect image. That's the polite version. During the six years before "Car Wheels on a Gravel Road" in 1998, she did so much rewriting and re-recording she was considered a neurotic perfectionist.

You don't hear that as much anymore. "World Without Tears" is her second album in three years, and she doesn't skimp on the vivid imagery.

Others might say to a lost lover: "I miss you." Williams' version: "Scorpions crawl across my screen, make their home beneath my skin, underneath my dress stick their tongues, bite through flesh down to the bone. And I have been so (expletive) alone."

She gives some credit for her prolific streak to a common songwriting hero, Bob Dylan. Williams said she's writing fewer narratives now and more about emotions after seeing Dylan go in a similar direction lately.

One good example is the jumble of images in "Real Live Bleeding Fingers and Broken Guitar Strings," a searing rocker that's a tribute to singer Paul Westerberg, who she considers a kindred spirit.

The public support she's received has also made her more confident in her work, she said.

"My feeling is that she's real comfortable with her career, the way that it's progressing," said Luke Lewis, president of Lost Highway, Williams' record company.

Williams seemed to listen to a lot more music before making this album, he said. She's always been well-steeped in the music of the 1960s and early 1970s, but this time she seemed to delve into more blues, he said.

"Her tastes have always been varied, and I'm not so sure why a lot of her records hadn't been that way before," he said.

Success at a price

Lewis recounted a dinner he had in New Orleans with Williams recently, where he was trying to sell her on the idea of making a first-ever music video. He was making some progress until the people at the next table politely asked Williams for an autograph.

"She turned around and said to me, 'If I make a video, that's going to happen twice as often. I don't want to do it."'

Williams admits that it's cliche, but she sometimes feels that success isn't all it's cracked up to be.

"I've achieved everything I have ever dreamed about, basically," she said. "But I'm also going through that transition in my life now. I'm not 25, I'm 50. It didn't start happening for me until I was in my 40s."

Like fellow travelers Stevie Nicks and Sheryl Crow, Williams has learned that professional success comes with a personal price. It's tough to maintain relationships, particularly when your pool of available men is filled with other musicians.

"To me, this is a lot harder than it was when I was sleeping on someone's couch and playing for tips in Austin, Texas, in 1974," she said. "There wasn't the pressure. People didn't know who I was then. Most of the day-to-day struggles were in trying to pay my rent."

Coltrane's over. Now playing is Neil Young, whom Williams is supporting on a lengthy summer tour. Williams has another meeting. She ushers a visitor to the door, saying not to hesitate to call if anything is unclear.

"I know how important it is to get the details exactly right," she says.