Relaxed in jeans and a gray, V-neck sweater, she is entertaining a visitor in her bedroom, which also serves as her office. It's where she goes each day with her lap top to craft the stories that shape her novels as well as her syndicated column, "The Rest of Us." 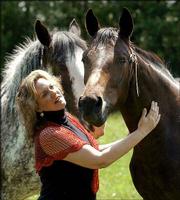 Author Jacquelyn Mitchard pets her horses outside her Oregon, Wis., home. Mitchard has just finished a 23-city tour to promote her latest book, "Twelve Times Blessed." The author attributes much of her success to Oprah Winfrey, whom she calls her "fairy godmother."

The room is filled with treasures, from photos of her family and friends to the wood molding of the windows, made from the cherry trees surrounding her seven bedroom Tudor, which sits on 80 acres of land.

Out back is a stable where she keeps the four horses she calls her "girls."

The day before, she finished a 23-city tour to promote her latest book, "Twelve Times Blessed." Now, it's time to relax and regroup for Mitchard, who attributes much of her success to Oprah Winfrey, whom she calls her "fairy godmother."

Mitchard was a columnist for the Milwaukee Journal Sentinel, struggling to raise three young children and a high schooler on her own after her first husband died from cancer, when Winfrey selected the writer's first novel, "Deep End of the Ocean," for her book club, in 1996.

The book, about a Midwestern family whose child disappears, had a first printing of 100,000 -- impressive for any first-time author. But within a week of Winfrey's announcement, there were 640,000 copies in print and the book shot from No. 14 to No. 1 on The New York Times list of best sellers. The book, which sold more than 3 million copies, was later made into a movie, starring Michelle Pfeiffer.

"I'm grateful to her with all my heart," Mitchard says about Winfrey. "On the other hand, that book meant a great deal to a great many people. All of the books have had some emotional effect on some people."

During her promotion tour in New Jersey, a woman whose husband died in the Sept. 11 terrorist attacks told Mitchard that when she read "Twelve Times Blessed," about a widow who remarries, she realized she could still have a life. It really affected the author.

"It wasn't how her husband died that was so moving," Mitchard says, choking back tears. "It was the fact that she felt that way as a result of reading something I'd written. It was so worth the price of admission."

'If I write it, it happens'

Mitchard had a dream that led to "Deep End," which she wrote after her first husband died. A dream also led to "The Most Wanted," which came out in 1998.

Characters and stories in Mitchard's books often are taken from her life. For example, "Twelve Times Blessed" is about a middle-aged widow who marries a man 12 years her junior after a brief courtship. She says she was far enough removed from widowhood to write "without it being searing."

"I wanted to write about the experience of widowhood and remarriage, but I didn't want to write my experience of it," says Mitchard, 49, who is married to Chris Brent, 37.

In "The Most Wanted," which came out in 1998, she writes about a single lawyer who takes on the cause of a pregnant teen and falls in love with a younger carpenter working on her house. After the book was published, Mitchard hired Brent, a carpenter, to put some tile in at her house. Five weeks later, they were married. That was five years ago.

And in "Theory of Relativity," published in 2001 and inspired by a real-life court case in Milwaukee, two families are torn apart in a custody battle over a baby girl whose parents died in a car crash. While writing the book, the birth father of a baby daughter adopted by Mitchard and Brent challenged custody. The couple won. Mitchard has six children between the ages of 4 and 27. Four were adopted; the oldest is Mitchard's stepdaughter from her first marriage.

Naturally, Mitchard has concerns about the events in her fifth novel, "Christmas, Present," which comes out Nov. 1. The book is about a young couple whose car breaks down in Boston on their anniversary. Mitchard wouldn't give much more away about the story except to say that the couple must gather their family to face a startling revelation.

Runs in the family

Mitchard won rave reviews for "Deep End of the Ocean" for her writing and storytelling abilities, but her three fiction books since have been criticized and praised.

"While this is a compelling novel -- timing and momentum are Mitchard's strengths -- it's not as fully realized as 'The Deep End of the Ocean,' and rarely rises above its own sentimental constraints to any greater wisdom," The Boston Globe said about "The Most Wanted."

Mitchard was born and raised in Chicago to parents who were high school drop outs. Her father was a plumber and her mother was an avid reader and told wonderful stories. "In my family, you know, telling a story ... became the way you got attention," Mitchard says.

She studied biology at the University of Illinois and later switched to American literature and finished at Rockford College.

After graduating, she worked as a teacher and waitress before landing a job at the Pioneer Press in suburban Chicago. She later worked for The Capital Times in Madison, Wis., and the Sentinel. She's been a contributing editor to Parenting magazine for 15 years.

Her weekly newspaper column, "The Rest of Us," has appeared in the Sentinel for 20 years. She's been nationally syndicated by Tribune Media for five years. In 1997, the columns were put together in a book, "The Rest of Us."

She writes every day on her laptop in her bedroom. "I always write and always read, and I always live and through living come the stories," she says.

Besides her novels, she's written a children's novel and text for three picture books for children. One will be released in October 2004 and the others are still being edited and illustrated.

There are many stories she'd still like to weave -- a historical novel, a ghost story and a survival adventure story with all women. She's also writing two screenplays with screenwriter John Roach, a TV producer and writer who co-wrote David Lynch's "The Straight Story," a 1999 film about a 73-year-old man who drives his mower cross country to visit his estranged brother.

"I wanted to do all these things because I think it would be such a giggle," Mitchard says.