London — In a breach of royal security, a publicity seeking comedian burst onto the stage at Prince William's 21st birthday party and snatched a microphone from the prince as he addressed 300 guests, including his father and Queen Elizabeth II, news reports said Sunday.

Police detained the intruder, who was identified by his father as Aaron Barschak, 36, a comic who has staged at least one other similar prank and who calls himself a "comedy terrorist." 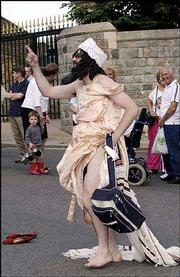 After greeting guests outside Windsor Castle, Aaron Barschak, 36, reportedly broke into Prince William's 21st birthday party Saturday night. Barschak, who calls himself a "comedy terrorist," was arrested on suspicion of burglary and was released Sunday without being charged.

"He would not have been trying to harm anyone, not at all. He is actually not at all anti-royal," Fred Barschak, 72, said outside his north London home. "He is a professional stand-up comedian who is desperate to be a serious actor."

Police said Barschak was unarmed. He was arrested on suspicion of burglary, which covers unauthorized entry to premises, and was released Sunday without being charged.

Media reports said the comedian stumbled on to the stage where William was making a speech to thank his father, Prince Charles, and his grandmother, the queen, for organizing the "Out of Africa" themed party.

Barschak grabbed the microphone and began shouting before security officers dragged him away.

Sky Television showed Barschak -- wearing a pink dress, turban, sunglasses and false beard -- dancing Saturday outside the castle as guests arrived. The footage shows him shouting "Happy birthday. Out of Africa, I'm out of this world."