Although short, it does many things better than Super Mario Sunshine

With the Game Boy Advance's Wario Ware, Inc. garnering the highest of critical praise, many are highly anticipating the debut of its Gamecube big brother Wario World this week. And although Wario World wasn't developed by Nintendo first-party talent, the game still has that Nintendo magic while it lasts...which isn't very long. 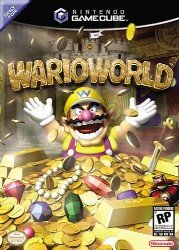 Treasure, the developer responsible for the recent critically acclaimed Ikaruga, got the nod to develop Wario World. And why not? Treasure has a laundry list of engrossing titles with tight gameplay mechanics. But the fear I had when I heard Treasure was the developer was confirmed last weekend as I finished the game in two sittings with a total of five-ish hours of gameplay. If you actually take the time to collect everything along the way, it might push it up to six or seven hours. This is much better than Ikaruga, which takes about 90 minutes to complete once you figure out the simplistic patterns.

That being said, Wario World is a ton of fun the whole way through, much more so than the equally lengthed Luigi's Mansion. As a matter of fact, I had more fun with Wario World than I did with Super Mario Sunshine.

Wario is on the search for his stolen treasure again. This time his treasure has turned into monsters because of a mysterious black jewel. Likely story.

There are four worlds with two stages and a boss stage in each world. The two stages in each world also have a boss, which brings the count to 12 total bosses in a five-hour game! Along the way there are puzzles to solve and bonus stages very much like Super Mario Sunshine. These are scattered throughout each stage to provide a way of collecting red jewels as the prize. At the end of each stage, a totem requires a certain amount of red jewels to open the door for the sub-boss. So you can't skip over the bonus stages; you must actually complete a few of them.

Pressing Z will make Wario a human vacuum. When coins scatter everywhere, it's much easier to suck them in rather than running to them. Coins are necessary for health power-ups and to continue. But there are so many coins to get that it's unlikely you will ever run out of coins to continue or for health garlic. (Yes, garlic.)

Even though some of the bonus stages are true 3D, the main game is not a free range 3D like Mario Sunshine, but you can move up and down with a fixed camera that makes is a glorified side-scroller. With that comes some problems with depth perception. Since there are very few shadows on the ground from platforms, sometimes it's hard to gauge how far up or down you need to be to jump correctly. You will fall and be inspired toward four-letter words not because it was your fault, but because this part of the gameplay was unpolished.

The gameplay mechanics aren't as deep or original as you would expect from a Nintendo title, but they are so solid and tight that the enjoyment level benefits from the great control. Wario can jump, butt-stomp, throw, super-throw, dash, spin enemies into others, cannonball jump and piledrive his enemies into oblivion. All of these mechanics are easy to perform. Even the spin move which requires you to move the analog stick in a 360-degree motion is easy to pull off unlike Zangief's piledriver move from Streetfighter 2.

Being a big fan of boss battles, I was very satisfied with what Wario World had to offer. From turning bosses on each other, to throwing them off cliffs to huge monsters towering overhead, Wario World truly delivers.

You have no chance to pace yourself and not use a continue since you would never want to lose all that progress. The only time you can save is after a stage. I don't think checkpoints are the answer, either. In Mario games, there is a stage to boss ratio of around 8:1. This formulaic pace has worked for years. In Wario World, the ratio was 1:1. The gargantuan stages should've been broken up into four or five. Making the ratio at least 5:1. Poof! Now you have 40 stages! Sure, the length of stages might be the same, but the pace of the game would be extended, leaving the gamer feeling like they don't have to rush through one huge stage at a time.

Even the colorblind will see colors

The graphics are a mixed bag, but weighted on the good. Some enemies and bosses have tremendous textures and bump-mapping, juxtaposed with Wario's low-polygon character model. Some textures in the game are blurry and blah, but never reach the disappointing texture level of Mario Sunshine. The game is high on making particles fly everywhere when you defeat an enemy which makes it more rewarding to watch and play.

There are different types of worlds with fire, water, gold, clouds, ice, etc. Where Mario sunshine was not varied and lacked color variety, Wario World makes up for in spanning the color palette and making sure every last pixel is saturated and glowing with its respective color.

As stated before, the lack of shadowing can make platform jumping a bit of hell at points, but it's infrequent. The game runs in progressive scan but no widescreen. Nintendo really needs to have widescreen options in their games. The framerate is a solid 60fps with absolutely no slowdown with a crapload of enemies on screen.

The sound is very appropriate for Wario. Everything feels like a twisted Playskool hip-hop album if you can imagine that. The sound effects pop and kaboom in Dolby Pro-Logic II. All of the music is pretty overdone, but it fits. Oddly enough, it never gets annoying, but rather endearing.

After completing the game there is little to come back to unless you want to unlock some Wario Ware games and download them to your Game Boy Advance. But there is no reason to since it's not a complete picture of what's available in the actual game. You are much better off just buying Wario Ware.

I loved the game for as long as it lasted. I might even go back through it again since it's just so fun to pummel helpless little creatures. But for the budget conscious, you might want to rent before you buy since you will most likely beat it in your rental period. But I guarantee you will have a lot of fun.

Wario World will hit stores by this Wednesday.