Hoping for the last word

'Spellbound' star Angela Arenivar reflects on being queen of the bee

"As an eighth-grader, I never realized I was living the American dream," says Angela Arenivar, one of the stars of the documentary "Spellbound."

"The movie really put that into perspective for me. My parents did come over here from Mexico to provide a better way of life for their children. We've all taken advantages of the educational opportunities that they wanted us to have."

Angela Arenivar is one of eight junior high students featured in "Spellbound" who make it to the National Spelling Bee finals.

Arenivar is one of a handful of eighth-graders featured in the Academy Award-nominated "Spellbound," which opens today at Liberty Hall. Shot in 1999, the picture captures all the joy and drama of that year's National Spelling Bee.

Her story is especially memorable.

Hailing from rural Perryton, Texas, Arenivar is the youngest of four siblings raised by parents who immigrated from Mexico. The fact that her mother and father still don't speak English makes her tale of wordplay mastery all the more compelling.

In the film, she first appears in a regional competition facing off against a rival finalist a challenge that lasts more than 50 rounds before her opponent misspells a word.

Eventually, the bubbly Arenivar makes her way to the nationals in Washington, D.C. But she suffers an exit in the third round when faced with the daunting task of spelling "heleoplankton."

"It's the only word in the English language that starts out heleo instead of helio," she explains during a recent phone interview. "I thought I had spelled it correctly. 'Wheedle' (a word she guessed correctly) I didn't know. And you can tell I didn't know it because I kept stalling for time ... and making a fool out of myself."

So can she use a sentence with the word heleoplankton in it? 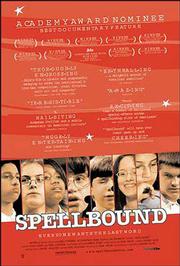 Although Arenivar is currently on view before audiences as a typical gawky 13-year-old, the truth is she's preparing to head off to college.

Having to now watch herself as an eighth-grader on screen "is a little embarrassing because I have changed quite a bit," she says. "I just graduated from high school, and it's been, what, four years? I tend to get over it because I know it was four years ago. I think everybody's changed."

Soon she will join the ranks of the Big 12 as a pre-med student at Texas A&M, which is a 10-hour drive from Perryton. She is contemplating pursuing pediatrics or even psychiatry. (Apparently, all her study of Latin word roots really WILL have a practical use).

"It's a little ironic that I'm going to A&M because my brother (Leroy) went to the University of Texas," she says. "There's a big rivalry. I guess I was just being a little rebellious."

Arenivar was one of the only kids featured in "Spellbound" to continue in spelling competitions after eighth grade. Throughout high school, she took part in University Interscholastic League events.

"For three years in a row, every time I went to state I choked," she says. "I knew the words, but I got too nervous. I thought, 'Angela, you should know this. You've done this for years.'"

Her senior year, she finally earned the top trophy.

"That was a really great way to end my spelling career," she declares.

Even though her word battles have officially ended, Arenivar takes great pleasure in memories of being a part of "Spellbound." She still keeps in contact with castmates April DeGideo and Nupur Lala ("We e-mail each other and chat on AOL Instant Messenger," she says.) And she frequently serves as a mouthpiece for the film when publicizing it for the studio.

"I never get tired of watching it and I'm not just saying it's a great documentary because I'm in it," she says. "But they did a great job with it."

Her favorite moment in the movie is during a montage at the end when her brother George (now also in the medical profession) reflects on the family's new generation of success.

"My brother says, 'If my dad were to die today, he would die a happy person because he feels like we've accomplished what he wanted us to.' I remember watching that the first time, and I cried," she recalls.

"It made me realize that I HAVE made my parents proud. It's just great in this documentary how that special moment in my life has been, in a way, immortalized."