You can tell right away how good a pastry chef and baker Alison Olewnik is - just peer into the little sample baskets that line the countertops outside her kitchen. 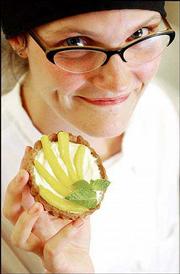 Well, not completely. A few crumbs left over from tempting chunks of apricot matrimonial bars or double chocolate brownies remain forlornly on the wax paper liners.

That's because the baked goodies that leave Olewnik's hands move quickly to the cash registers at the front of the Community Mercantile Co-op, 901 Iowa.

Olewnik the name's Polish, and it's pronounced "Olevnik" has worked as pastry chef and bakery manager at the co-op since January. In the process, she has significantly helped raise the bakery department's profile at the store as well as give its baked goods a major bump up in quality and reputation.

As much as co-op customers are enjoying the cookies, cakes, quick breads, pies and tarts that the store's minuscule bakery is turning out these days, Olewnik is savoring the compliments.

"An older gentleman came in and sampled our rose sugar shortbread, and he said, 'This is equal to if not better than any pastry I've tried in France,'" Olewnik says, beaming.

"That's really what I'm here to do: bring people joy through food."

There are those who feel Olewnik is accomplishing that mission, among them Sula Teller, the co-op's food service manager.

Teller hired Olewnik to work as pastry chef and baker soon after Teller herself was brought on board early this year to revamp the store's kitchen production and foods-to-go area. The two women had already spent nearly three years working together in the kitchens of Milton's Coffee & Wine, 920 Mass., and later the now-defunct PrairieFire: An American Bistro, 724 Mass.

Olewnik, 23, was among the first people Teller thought of when she began to rebuild the bakery and deli staff, with an eye toward boosting product appearance and quality.

"I can trust Alison that nothing is going to leave her kitchen that isn't good. You never have to worry about anything she's going to put out for customers," Teller says.

"She's an artist; she knows her craft. There are people who literally have never tasted anything bad from her hands."

Alison Olewnik transfers cookies onto a pan. Olewnik, a pastry chef and baker at Community Mercantile Co-op, learned the chemistry of baking at the Manhattan-based American Institute of Baking.

If that's true, it's because Olewnik has a solid background in the fundamentals and technical aspects of baking.

In fact, she is the youngest graduate of the world-renowned baking science and technology course that is the cornerstone of the educational programs offered by the Manhattan-based American Institute of Baking. Olewnick was only 19 when she completed the course, which at the time lasted 16 weeks. It's now a 20-week program.

"It's not a culinary school; you spend a lot of time in chemistry labs studying gums, starches, flour everything that you use in baking," says Olewnick, a Manhattan native and a junior at Kansas University. "It gives you the tools to be able to manipulate your products the way you need to. You learn how to make your product turn out exactly the same way every time."

Students are taught to understand the chemistry of baking and the interaction of different ingredients, so that they can achieve the results they're looking for as bakers. The course attracts employees of major food corporations around the United States and the world, such as Earth Grains, Dolly Madison and Frito-Lay.

So Olewnik was a bit of an oddity.

"It's usually something a company will send its foremen to. I was one of five women in a course of 70 students, most of whom were over 35," she says.

"It was really my mother who convinced me to get a well-rounded education, and that's what I got there."

Maureen Olewnik, her mother, is vice president of the research division of the American Institute of Baking. The division is contracted out to conduct research on all aspects of baking for the U.S. government and large corporations.

"It gives me a little bit more of an edge to what I'm doing," the younger Olewnik says of the training she received in Manhattan. "I can pull something right out of the oven and know what's wrong. I don't have to go around and research what's going on."

Olewnik doesn't do it all alone in the kitchen she has lots of help.

Tammy Norton and Rebecca Mayer are the morning bakers, who come in at 4:30 to turn out fresh muffins, turnovers, scones, breakfast bars, cinnamon rolls and croissants.

Then Olewnik arrives around 8:30 a.m., working in the kitchen's tiny production area and staffing the bakery until about 5 p.m.

"I want this to be the neighborhood bakery, the place where people come in to get their birthday and wedding cakes. If they need to cater something, they know that they will always get something that tastes good and looks nice," Olewnik says.

"I want the place to always surpass people's expectations of what a grocery store bakery can produce."

The most challenging part of that job, she says, is consistency the ability to achieve that level of quality every day.

Though that's a difficult task, it has its sweet rewards.

"The most satisfying thing," Olewnik says, "is when we put out samples and I hear people saying, 'Oh my goodness this is the best thing I've ever had!'"