Amsterdam, Netherlands — When Spanish architect Antonio Cruz was looking for artistic inspiration for his latest project, he went to a logical place -- the museum.

Cruz & Ortiz Architects had been selected out of seven international candidates to renovate a building treasured almost as much as the Rembrandts and Vermeers that it houses: the Rijksmuseum. So, Cruz and his business partner, Antonio Ortiz, set off on a brainstorming tour of museums in Paris, London and Berlin.

The resulting design for the Rijksmuseum, or national gallery, envisions spacious, bright exhibit halls, better facilities and a grand entrance hall large enough to shelter guests from the characteristically wet Dutch weather -- instead of having them wait in the lines that now stretch outside the building for most of the year.

The $230 million renovation, scheduled to run from 2004-2008, will be the most extensive since the original four-towered building by Pierre Cuyper that opened in 1885. It was then the southern entrance to the city and accommodated only a tenth of the 1.2 million visitors it now receives each year.

"In those days, the focus was on the cultured, high society. Now it is mainstream," Cruz said in an interview on a warm spring afternoon in the Dutch capital. "There didn't need to be a shop or a restaurant. We need to adapt it to the new reality."

The museum is the centerpiece of the Museum Quarter in downtown Amsterdam, famous for housing paintings from the 1600s, the Dutch Golden Age of exploration and trade. Treasured masterpieces such as Rembrandt van Rijn's "Night Watch" and Johannes Vermeer's "The Kitchen Maid," as well as the collections of ornate pottery, furniture, silver and glass will remain on display throughout the renovation.

Cruz recently presented the final draft design for the "New Rijksmuseum" to a panel of art directors and financiers for approval. First demolition work is expected to get underway next summer.

Cruz said that the changes will be profound, even without altering the original structure, itself a landmark in the Netherlands.

An artist rendering shows part of the proposed renovations to Amsterdam's Rijksmuseum as designed by the Spanish architects Antonio Cruz and Antonio Ortiz. Demolition works start in 2004, and the actual construction is slated to start in 2005.

The most dramatic change, he said, will be the reopening of two courtyards that were filled with a clutter of small exhibition spaces in the 1960s. Today, they are divided by a dark tunnel used by cyclists and buskers.

"When you enter the museum now, you feel immediately lost. It's like a maze. There is no point of orientation," Ortiz said.

In the new design, the tunnel will be broken open and the courtyards returned to their original state. The glass ceilings, closed off for the past four decades, will be reopened and a number of exhibition spaces again filled with natural light.

"We will see a lot of differences (to how it is now) and more similarities to Cuyper in the beginning," Ortiz said. "You will actually be able to see one courtyard from the other."

Last October, Cruz & Ortiz opened a Dutch branch of their Seville-based business -- overlooking the West Wing of the Rijksmuseum -- for the duration of renovation.

As work progresses, much of the collection of 5,500 paintings, 700,000 photos and drawings and 65,000 historic artifacts will remain accessible to the public. Some pieces will go on loan to other museums, while other works will be rotated into areas not under construction.

The entire museum was unexpectedly closed in late April after asbestos was found during preparations for the renovation. 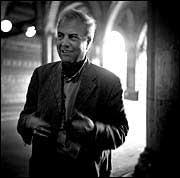 Spanish architect Antonio Cruz gestures in the passage under Rijksmuseum in Amsterdam while explaining the renovations he and his partner, Antonio Ortiz, have designed. The renovation will be the most extensive since the original four-towered building was constructed by Pierre Cuyper in 1880 to accommodate 10 times fewer visitors than the 1.2 million who now come each year.