We got the beat

But she's competently rapping out her part of a complex West African rhythm on a djembe that's nearly three-quarters her height.

She wraps her tiny legs around the drum to steady it, listens closely to the pulsing rhythm rising from the circle of youngsters around her and mimics the sound.

It's the same way she might learn this rhythm if she were a child in West Africa -- not by reading sheet music, but by repeatedly absorbing the beats at community rituals and ceremonies. She and nine other students in a West African drum and dance workshop last week at the Lawrence Arts Center were quick learners.

By the end of the first day, the children -- who ranged from age 4 to 14 -- had learned the names of the instruments Dosso has collected on trips to West Africa. There was the djembe (pronounced jem-bay), an hourglass-shaped drum usually carved from the trunk of a single tree with a goat skin stretched taut over its top. It's played with the hands. The djun-djun (pronounced doon-doon), however, is played with big sticks, usually while standing up. It's typically a bigger drum, cylindrical, with skin on both ends.

"My most favorite drum is the djun-djun because you play it with sticks," said 5-year-old Joshua Keltz.

'Makes you want to dance'

Some of the smallest children preferred to play the shekere (pronounced shaker-a). The gourd with a net of beads woven around its most bulbous end is played by striking the beads. It makes a scratchy sound and adds texture to drum circles.

African drum and dance instructor Julie Dosso, right, teaches a group of girls a dance involving hand movements. Pictured are Ashley Booher, left, and Amber Booher, both of whom participated in the weeklong workshop last week at the Lawrence Arts Center.

Early on the second day of the workshop, Dosso noticed the children's pounding had dwindled to mere tapping.

"What's the best thing about playing drums?" she yelled.

"You can be loud!" a chorus of children sang back in unison.

They got the point. As their confidence grew, so did their volume.

Dosso taught them the proper way to strike the drums.

"Let your hand bounce off like a trampoline," she instructed as she demonstrated. "This is a skin. The way it makes a sound is it vibrates."

Five-year-old Kiara Clark admitted picking up the rhythms was "really, really hard" at first, but once she committed them to memory, they became easier to play.

"I'm really happy with the drums," she said. "When I take that class, it really feels good to be playing the drums. It makes you want to dance a little bit."

Actually, the burgeoning musicians danced a lot. The workshop met for an hour and a half every afternoon last week. When the children grew restless on the drums, Dosso hustled them out of their seats to teach them the dance component of the song.

"The dancing is very tiring," said Clare Frantz, 10. "With the drumming, your arms get a little weak, and sometimes your hands hurt. Once you get used to how it feels, it doesn't hurt as much."

Frantz said Dosso had taught the class some interesting things about African culture.

"She tells us a lot about Africa and what kind of music they like," she said. "She'll tell us about how the drums are used and what the different names of them are."

The children learned that West African drum music is built of polyrhythms, or combinations of several rhythms, and that songs and dances are one and the same. The song and dance the children learned was the Coucou, a traditional song of welcome in which the djun-djuns and djembes play different parts while people dance.

In Africa, music is a medium for transmitting knowledge and values and for celebrating important communal and personal events. It's the harmonious aesthetic of African drum and dance -- the notion that everyone's part is needed to complete the message -- that drew Dosso to it.

A dancer by trade, the 33-year-old Dosso, whose parents live in Lawrence, led a children's drum and dance company in Orlando, Fla., before moving to Denton, Texas, where she's working toward her master of fine arts degree in dance at Texas Woman's University. She got turned onto West African dance while studying modern dance in Rochester, N.Y. She studied under teachers from Senegal.

"I came to it as a dancer," she said, "but it wasn't until I started drumming that I began to understand the essence (of West African music). I think it's really the energy, the spirit of the drums and rhythms, that people connect with on a real kinesthetic level, whether they're drumming, dancing or singing."

By the end of the weeklong class, some of the children were beginning to feel that connection.

"I just signed up for it because it looked pretty cool," Frantz said of the workshop. "I've actually learned a little about the African drums for school. Now I'm getting into the beat of it."

Julie Dosso leads youth in a dance during a weeklong West African drum and dance workshop at the Lawrence Arts Center. Students practiced Tuesday for the informal performance they gave their parents Friday. 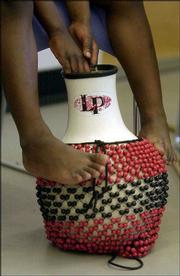 Ashley Booher's hands and feet hang over a shekere, an African percussion instrument made by stringing a net of beads over a gourd, at the Lawrence Arts Center. Booher attended Julie Dosso's West African drum and dance workshop last week at the center.