Enter the Matrix is the quintessential example of hype selling a video game. It sold over 2.5 million copies in less than one month. But one trip to e-Bay or your local used video game store will prove that it seems like half of those that sold are already being re-sold, and I understand why.

First, let me say that I am a huge fan of the Matrix series and that I felt that I am among the minority when it comes to liking Matrix: Reloaded. I loved the movie. So it is no doubt that I was looking forward to seeing the extra Matrix movie scenes that are exclusive to this game. If you don't know, the real time movie scenes in the game star Jada Pinkett-Smith as Niobe and everyone else from the original cast. The scenes were filmed right along side Reloaded and Revolutions. The lot for the game takes place right after the CGI animated short "Final Flight of the Osiris." The movie clips are not bad, and even sometimes very entertaining, but are too chopped up with gameplay. 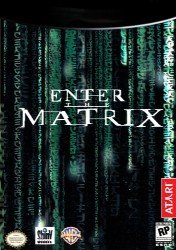 Oh yeah, I forgot, Atari tried to make a video game out of this. Even while playing, you will forget there is an actual game to play because of the horrid pacing and frequent, and I mean frequent, load times. Run here, kick, punch, shoot, load...Listen to voice over, run there, kick, shoot, punch, load and watch five minutes of a poorly transferred movie (visually), load...

You get the idea.

When you actually get to control your character, you do get to use your "focus" which is the slow-motion bullet-time mode. The bullet effects look sweet, especially when you use your environment to jump off of, doing cartwheels or jumping backwards while shooting forwards. You can pull off tons of acrobatic stunts just like the movie, but the poor level design and mostly blah graphics and textures make the fun factor on the acrobatics wane about five hours into the game.

The Matrix inspired games like Dead to Rights and Max Payne to have bullet-time effects. It's ironic that the actual game based on the movie doesn't pull off the bullet time as well as the games inspired by it.

The fighting animations for your characters are really smooth and give a great sense of butt-kicking, when it looks like contact is made. Collision detection is a major problem in this game. Three out of five times, your punches and kicks will never actually connect, but it sure kills your enemy. Sporadic collision problems are forgivable, but this is constant, having "this game was rushed for the movie release" written all over it.

Then there is the camera. If you want to be lucky and catch the 40% of fights where your kicks and punches actually land, do not fight near a wall. Too many times the camera will go behind a crate or a wall, leaving the fight unseen. These problems also are indicative of a rush job.

Perhaps the worst parts of the game are the driving missions. The city foregrounds are blocky, the car controls are way too sensitive and lack any sense of chasing and the objectives are as mundane sometimes as "drive around for a few minutes."

The sound is amazing. Each version is encoded in some sort of Dolby surround, having the bullets whiz from every direction. The sound effects and score are straight from the movie, so you know the experience will be top notch.

The character models aren't that bad.

Unfortunately the graphics don't live up to the sound. You will see some very good character models filled with grainy, gray textures that leave even the slightest of gamers with a feeling of pure blah. Even on the Xbox's 720p widescreen HD signal, it looks blah, but a more detailed blah.

Exit without the Matrix

If the Wachowski-directed movie scenes woo you into the game or you are blatantly curious about the subplot movie, then rent it and watch it as you mindlessly play. If you are wanting this to trump Max Payne, you will be disappointed and are better off borrowing Enter the Matrix from your friend who was already duped by the hype into buying it.