Hershey, Pa. — It has been 100 years since the first shovels of dirt were turned for a factory that created a community, where residents still are mindful of founder Milton S. Hershey, his generosity and his business acumen.

This weekend, Taylor and her fellow 13,000 Hershey residents begin celebrating the months-long centennial of that groundbreaking. A historical marker to be unveiled today by the state honors "Hershey -- model industrial town and noted tourism destination."

For residents, many of whom either work for or are retired from Hershey, the anniversary is particularly sweet.

Six months ago, they thwarted an attempt by the Hershey Trust Co., which has overseen Milton Hershey's fortune since his death 57 years ago, to sell the company. A sale, they said, would have shattered the town's identity.

Hershey had failed at candy ventures from New York City to New Orleans before succeeding with caramels, at a plant down the road in Lancaster. He soon sold that business and built the chocolate factory.

By the time the factory was finished in 1905, Hershey had whipped up a milk chocolate formula that is still being used today. 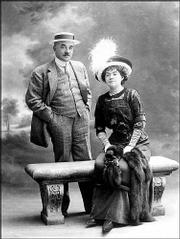 Chocolate magnate Milton S. Hershey and his wife, Catherine, pose for a studio portrait in 1910 in Nice, France.

Just about everything in town sprang from Hershey's chocolate.

His profits built every amenity for his workers, and he assumed a role that some in town refer to as a "benevolent dictator." His companies sold home sites to employees and underwrote mortgages for them.

At the height of the Depression, he built the Hershey Theater and Hotel Hershey, and a 7,000-seat ice hockey rink. In the 1960s, his foundation gave $50 million to help found the Pennsylvania State University's only teaching hospital.

A $5 billion trust feeds, clothes, shelters and educates about 1,300 disadvantaged boys and girls at a school he established in 1909.

Hershey's money also funds cultural institutions, such as the theater and the botanic gardens, and more than $1 million a year goes to the town's public schools.