Kansas University Chancellor Robert Hemenway spent seven years immersed in the life and work of Zora Neale Hurston and wrote the first biography of the author of "Their Eyes Were Watching God."

But he acknowledged in "Zora Neale Hurston: A Literary Biography," published in 1977, that his was not the definitive book on Hurston's life and that other versions remained to be written. In particular, he said, a black woman could bring perspective that he lacked to Hurston's story.

Hemenway reissued that call at the 1994 Hurston festival, and Valerie Boyd listened.

Her "Wrapped in Rainbows: The Life of Zora Neale Hurston" is the first new biography of Hurston in 25 years. It takes a different approach than Hemenway's book.

"I was trying to paint an intimate, full portrait of Hurston," Boyd said during a recent telephone interview from her Atlanta home. "I was trying to get inside her skin and tell the story from the inside out. My book has a different kind of accessibility and real attention to almost trying to write the story in a novelistic way."

Boyd, arts editor at the Atlanta Journal-Constitution, and Hemenway on Monday will share their knowledge of the writer/anthropologist who chronicled the lives of ordinary black people -- folks Hurston called "the Negro farthest down" -- during a program to kick off Women's History Month.

"There's no question -- this was certainly true of Hurston -- that women writers have sometimes been neglected, have been forgotten, particularly black women writers," Hemenway said. "So I think it's particularly appropriate, just coming off Black History Month in February and going into Women's History Month, to have this kind of discussion."

Hemenway and Boyd will open their "Conversation about Zora Neale Hurston" at 3:30 p.m. in the Mallott Room of the Kansas Union. It won't be the first time the two have bounced ideas off one another.

While conducting research, Boyd spent a week at KU, sifting through the two file cabinets of Hurston material Hemenway accumulated during his 1970s pickup camper forays across the country. Among his gems is a two-hour taped interview with Hurston's first husband and another with her former roommate. Both have since died.

But Boyd's book also benefits from more recent discoveries about Hurston. One big revelation: Hurston lied about her age nearly all her life. For years, she listed her birthdate as 1901. She was actually born in 1891 and later lopped off a decade so she could attend high school in Baltimore. 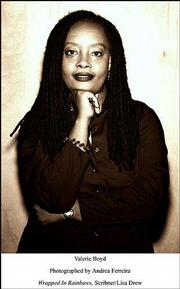 Valerie Boyd, author of "Wrapped in Rainbows: The Life of Zora Neale Hurston," will speak at 3:30 p.m. Monday at the Mallott Room in the Kansas Union with KU Chancellor Robert Hemenway, who published the first Hurston biography in 1977.

Hurston spent a happy childhood in Eatonville, Fla., the first incorporated all-black town in America. But when her mother died and her father remarried, Hurston left home to find her way. After high school, she attended Howard University and Barnard College and began writing during the Harlem Renaissance.

Hurston became friends with the likes of Langston Hughes, Fannie Hurst and Carl Van Vechten. She made frequent trips around the country, collecting black music, poetry and literature, enabling her to make black folk culture a component in the Harlem Renaissance.

"She was the only writer in the Harlem Renaissance from the South," she said. "Hurston WAS the folk."

She was also quite a personality -- someone who sought out the limelight and held occasionally controversial political views.

"She was somebody who came into a room and immediately kind of charismatically took over whatever was going on in that room," Hemenway said.

"Her friends from the Harlem Renaissance can remember her as a big storyteller and partier," Boyd said.

Though Hurston enjoyed periods of popularity during her lifetime, all of her books were out of print by the time she died a pauper in 1960. A Hemenway essay inspired author Alice Walker to journey to a Fort Pierce, Fla., cemetery in 1973 to place a marker on Hurston's previously unmarked grave. She wrote about it in Ms. magazine and sent a picture to Hemenway.

"That was a great boost to me because it showed that I wasn't just working alone on this relatively unknown writer, that somebody as important as Alice Walker was also affirming the art and the life of Zora Neale Hurston," Hemenway said.

The chancellor's interest in Hurston continues, though duties such as finding money for the university and making sure asbestos is abated leave him much less time to conduct his own research. He publishes Hurston essays periodically, and he wrote the foreword to "Zora Neale Hurston: A Life in Letters," a collection of Hurston's letters published by University of Southern California scholar Carla Kaplan in October.

Hurston's acclaim is soaring posthumously. Last summer, more than 2,000 people attended a party in her honor at New York's Central Park. Hundreds more gather each year for the Hurston festival in Eatonville. Film rights to "Their Eyes Were Watching God" have been purchased by Oprah Winfrey.

For Boyd, retracing Hurston's journey from girlhood to death has been a more intimate process.

"I definitely could relate to her struggles and her ambitions," she said. "That's how I was able to paint an intimate portrait of her life, trying to know what it felt like to be her and be with her and be her friend."

"Women really resonate with her work, especially 'Their Eyes Were Watching God,' which is the story of a woman's journey to know herself," Boyd said. "I think Hurston's contributions to American history and American letters have been extraordinary, so it certainly makes sense to celebrate her."