Houston — Photographs of 30 Nazi concentration camps taken over a dozen years are on display for the first time in the United States at Houston's Holocaust Museum, where photographer Michael Kenna hopes his images will be "impossible to forget."

Kenna first visited a concentration camp in France during the early 1980s and later began photographing camps throughout Europe in an attempt to preserve and share images of the historical sites, many of which had been abandoned.

His donated photographs have been exhibited in France, Spain, Italy, Germany and Switzerland. A book of his photography and the Houston exhibit are titled "Impossible to Forget: The Nazi Camps Fifty Years After."

"Eventually, it came to the time where it really needed to be shown in the United States," Kenna said of the exhibit, which will be on display through March 23. "It's not just a story about Germans and Jews, but all of us in humanity and what we are capable of doing."

Holocaust survivor Benjamin Waserman helped bring the exhibit to the Houston museum and says it is an important record he hopes others will take the time to view.

"Some of it is extremely difficult for those of us who were there," Waserman said. "It evokes a lot of bad memories. But on the other side of the coin, we want this to be recreated because we want people to know and understand how terrible that time in history was."

Kenna said he visited the camps for a chance to understand what occurred during the Holocaust. It grew into a journey to also help others see what he saw during his visits.

"It was so powerful. It is the most profound project I have worked on," he said.

And the work still is not done, said Kenna, who plans to continue visiting concentration camps and photographing them in future years.

"I photographed what I saw, and it's inevitable that emotion will come into the images because it's impossible not to," he said. "My hope is that it provides a catalyst, as it did for me, to want to know more about what took place. This is not just an aberration in history; it is a constant possibility." 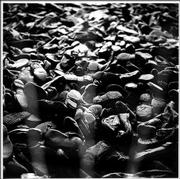 "Victim's Shoes" by photographer Michael Kenna is part of his exhibit, "Impossible to Forget: The Nazi Camps Fifty Years After," running through March 23 at Houston's Holocaust Museum. The images, from 30 Nazi concentration camps, were taken over a dozen years beginning in the early 1980s.

Waserman, who was arrested when he was 13 and spent three years in a concentration camp before he was liberated by the Russian Army, said Kenna's photography triggered a lot of memories and emotions. Before his arrest, Waserman, his mother and siblings were forced into hiding following their father's death in a concentration camp.

"The world has a very difficult time learning a lesson," Waserman said. "We don't want this to happen again, and in order to teach tolerance and to teach what hate and discrimination can do to people, we want people to see this and to feel it."

Kenna said a glimpse at his photographs doesn't tell the whole story of what went on at the camps. He said a picture of a serene pool of water may be beautiful, but there is much more to it than meets the eye.

"When you are there, you know that it is composed of the ashes of thousands and thousands of bodies," he said. "If you put your hand in it, it is gray and all you pick up is bone."

"A lot of photographers will try to show the horror of the Holocaust," Keel said. "He really tried to focus on contemplation. There is nothing brutal or gruesome about it that will make people turn away so they can't deny what really happened."