James Duft, the trio's singer and guitarist, dropped the nine-track CD off up at KJHK 90.7 fm, without the slightest expectation for what was to come.

Though Duft -- along with bassist Phil Bonahoom and (then) drummer Alex Logan -- had put in many, MANY hours of overtime perfecting the demo, he knew he shouldn't expect more than indifference from a fickle Lawrence scene.

Yet the demo was greeted with attention that many veteran local bands would be pleased with. Conner's tune "Tuesday" became an overnight hit at KJHK and the band booked a string of well-attended shows.

But it was a bittersweet buzz: while KJHK jocks and scenesters alike were lauding the tunes, the praise often came with the caveat: "sounds like The Strokes."

"I thought it'd be a buzz and people would just be like 'Oh whatever. They're a different band,'" Duft said. "But that was what we were labeled as. That was IT: 'They sound like The Strokes. They are not capable of doing anything else. That is who they are.'"

Naturally, the band's reaction was to defend their artistic integrity and not bend under the barrage. After all, they insist, they hadn't even heard of The Strokes when they were writing the songs, and anyway, the demo sounds nothing like The Strokes.

Still a year later, Conner finds itself still talking about the comparison.

"That's sort of been the whole problem from the beginning," Duft said. "Wanting to stick to your guns and saying 'No it's our music, we believe in it. We don't think it sounds like this.' But at the same time, so many people have said it sounds like The Strokes that we have to do something."

"We could talk and talk about how our old stuff doesn't sound like The Strokes," said Bonahoom. "But the fact was people thought it did ... including The Strokes."

(When The Strokes themselves came to town that October, the New York band happened to hear Conner's demo during their sound check at The Granada. Even they told Logan, the sound man for the show, that they thought it sounded like their own, recently hyped sound.)

"And we've heard it from A&Rs and other people we've sent stuff to: 'Dig your music, but...,'" Duft said. "It's forced us to take a step back and ask what are the things from our songs that we like that we don't want to lose."

Stepping back from 'The Strokes sound'
Perhaps the main change the band has made is to cut the distortion on Duft's vocals -- which is the easiest link between Conner and their mainstream counterpart.

"It was never really important to have it anyway," Duft said. "Looking back, a lot of it was just being unconfident in my singing. I liked (the distorted) aspect of it and it really sort of became my crutch.

"But because of it sounding like The Strokes, I had to let go of that. And it was really hard. I want it to be distorted or something so you can't tell it's me," he laughed.

Even harder for the band has been shedding songs that people associated with The Strokes -- namely, 'Tuesday,' which Duft concedes has overtones of that other band's song, 'Someday.'

"We've eliminated that song from our repertoire," Duft said.

"It's hard to let go," Bonahoom picked up, "But that song is going to hurt us."

"There's a lot of songs that we don't play any more," Duft said. "With new songs my criteria has become if I step out of the studio and my girlfriend or somebody I show it to says 'Oh this sounds like something you've done' or 'This sounds like The Strokes' I don't want anything to do with that song any more.

"But that hasn't happened for a while, so I'm happy with that," he said.

Conner at the Replay in December.

Different folks...
Conner's most dramatic change in the last year wasn't made because of The Strokes situation, but it has helped the band overhaul its sound.

Last fall, half of the band -- drummer Logan and the latest addition, guitarist Jeff Jackson (both also members of the Lawrence band Holstein) -- left for music school in Boston.

A few months later at the Replay, Duft was introduced to Bryce Boley, a drummer from Pratt, Kan., who had moved to Lawrence in '95 to play music, but still had not found a compatible band. And Conner found a natural replacement on guitar in Tom Wagner, owner and engineer at Underground Sound Studio, where the band recorded their demo.

"When we came here to record, we were a three-piece ... and instantaneously we became great friends," Duft said of Wagner. "Fast-forward a few months when we didn't have a guitar player any more, it just seemed logical. It wasn't even a thing really, all of a sudden you were just our guitar player and that was it."

For his part, Wagner was impressed with Conner from the get-go.

"I knew as soon as I recorded 'Tuesday' ... it was one of the first songs ever out of recording hundreds of bands that I went into my wife and said 'I just recorded a song that I know could be a No. 1 record. I just know, I can feel it. I get goose bumps when I hear it.

"Personally I don't think it sounds anything like (The Strokes)", Wagner continues. "I listen to The Strokes' record and everything about it is real buried, heavy, compressed out and so much of what we're doing is so much more alive and just a more natural kind of sound."

Bonahoom picks up: "The Strokes are real, real chunky with the guitars. Everything's real precise and quarter-note driven. That's something we've never had. We've got more of a swing.

"Musically, getting away from The Strokes isn't going to be difficult. What we're trying to do is bring out the differences, the stuff that we do that is unique to Conner."

"I think that's made us a better band," Wagner said. "It's made us grow with the music. It's made us see it in a whole new light of what it can be." 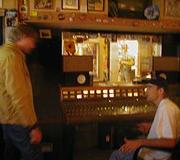 Duft: "We're doing some dancey songs, some slower, more heroiny rock stuff, some songs that are similar to the other stuff we've done, with the choppy vocal style. A little less lounge singery.

"We're still trying to come about OUR music in the same fashion so it's still OUR music, but doing something that makes us completely different than The Strokes."

Two new songs that the band says embody the changes are "She Tells No Lies" and "She Won't Take That Well." Though they've written and recorded a dozen other songs since making the mods to their sound, the band won't say when to expect a release.

"Anytime we've ever set a date, we've backed out," said Duft, adding that a tentative plan was to have a recording ready this summer. "Anyway, merchandising isn't the goal of anything we've set out to do.

"I want this to be perfect, I want it to be the best possible thing we can put out, and if there's anything I feel is mediocre ... if we're not doing the best job we can possibly do, I don't want to release it and spend the money and put it out."

But thanks to Wagner's Underground Sound, Conner can work and re-work its sound in the studio, without going broke. 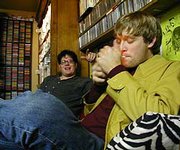 "It's an amazing, incredible bonus, (that) we can record here. It's like a great dream," Duft said. "I'm super happy with how everything's going for us. Musically I can't complain. The only thing I have to complain about is this damn Strokes thing. But we're working to get over that."