Pasadena, Calif. — The characters Bruce Willis plays are often put through a lot.

He gets shot in "The Sixth Sense," battered repeatedly in "Die Hard," blown up in "Armageddon" and ... well, how do you explain what happens to him within that dungeon in "Pulp Fiction?"

But those are just roles the 47-year-old actor has dramatized. Until shooting his latest action movie, "Tears of the Sun," Willis himself had yet to truly be tested while working on a picture.

"This was by far the hardest film I've ever done, both physically and emotionally," Willis says. "I don't think there was one easy day or one easy scene.

"We dragged cable three miles into the jungle every day to shoot this," Willis recalls, interviewed in Pasadena, Calif., while doing press roundtables. "It was not the Hollywood film with the catering over there and your plush trailer. We just sat out in the weeds every day and night."

In "Tears of the Sun," Willis plays a Navy SEAL lieutenant whose squadron is sent to retrieve an American doctor (Monica Bellucci) from the jungles of Nigeria after the collapse of the country's democratic government. The U.S. soldiers jeopardize their specific mission when they decide to additionally escort a group of victimized villagers out of the country before a rebel army overruns them.

Despite the movie's African setting, principal photography began in the wake of Sept. 11, 2001, so the filmmakers opted for a less unstable location. The island of Oahu offered a surprisingly effective double for Nigeria's terrain.

"It was about 110 degrees in Hawaii," he says. "The actors playing the Navy SEALs were given a choice of whether to carry a Hollywood pack, which would be stuffed with foam and have ammunition and magazines made out of rubber. We all chose to carry the packs that the real Navy SEALs would carry, which weigh about 65 pounds. 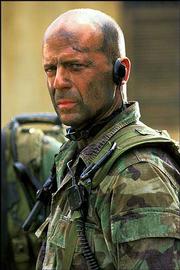 Bruce Willis stars in the military drama "Tears of the Sun."

The effects of the shoot still remain with the star. He's noticeably thinner and somewhat gaunt in appearance, as if preparing to make a sequel to "The Pianist." But the Emmy-winning actor doesn't want to give the impression that "playing soldier" was always an oppressive, backbreaking struggle.

"We did get to do some really fun things," says Willis, who was born on an American military base in West Germany. "We got to go onto an aircraft carrier. That's one of the cool things about the job, I get to see things and do things that a lot of other people don't get to do. I was standing probably 10 feet away from an F-16 taking off on this aircraft carrier. That was a very singular experience."

Willis first came across the script for "Tears of the Sun" six years ago when it was called "Rules of Engagement." Since then, two different films with that name have been released.

Even though Willis also played a soldier in his previous film, the box-office dud "Hart's War," the New Jersey native doesn't think he's being typecast. Nor does he believe this latest role in "Sun" reinforces the stereotype of him slumming in no-brainer action blockbusters.

"I think people make that association less these days," he says. "It doesn't bother me ... I have so little control over how a film is received or perceived. I've gotten to a point in my life where I look at what is in my control and what is not in my control -- and pretty much everything is out of all our control."

Nonetheless, the star is taking a more hands-on approach to filmmaking lately. Willis recently cofounded Cheyenne Enterprises with longtime agent Arnold Rifkin. "Tears of the Sun" is just one of a half dozen productions the team is currently involved with.

"I've got a little bit more of a say in it," Willis claims of his starring vehicles produced by Cheyenne. "But the way I judge my success is that I get to choose the films I want to act in. I have a certain amount of say in the actors I work with and the film directors I work with."

"What's great about Bruce is when he's not working, he's a lot of fun," says "Tears" director Antoine Fuqua, best known for his Oscar-winning "Training Day."

Bruce Willis, left, discusses a scene with director Antoine Fuqua on the "Tears of the Sun" set in Hawaii.

"He IS sort of that guy on 'Moonlighting.' Quick wit, great with humor -- he'll throw parties at his house so that everybody can have a good time. Then come Monday he'll go back to that dark world of being this character."

Next up for the sporadically jovial Willis (who filled in as a surprise guest host for the ailing David Letterman last week) are a pair of comparatively easy gigs. First, there's his reprise of gangster Jimmy "The Tulip" Tudeski in the comedy sequel "The Whole Ten Yards." Second, there's the voice of Spike the Dog in the animated effort "Rugrats Meet The Wild Thornberrys."

"I still get a big kick out of (acting)," Willis confesses. "If I could paint, I would paint. If I could sculpt, I would do that. One things you guys seldom write about is that acting, for actors, is an artistic expression -- you write about everything else BUT that. It's a way to express yourself creatively, and I still enjoy it."