It's one thing for a musician to win a Grammy, but Wynton Marsalis has collected a Pulitzer.

The respected jazz icon earned the Pulitzer Prize for Music five years ago for his 3-hour, 27-part suite "Blood on the Fields," an episodic tale of two Africans brought to America and sold as slaves.

The past few years have seen the trumpeter actively trying to eclipse his own towering ambitions.

"I can handle the pressure of trying to (follow that up)," says Marsalis, speaking from his home in New York City. "I record music all the time, so there's no real pressure."

Lately, those recordings have involved blending over 200 virtuoso musicians from an astonishingly diverse background for the even more elaborate "All Rise." For this epic piece, Marsalis coordinated the talents of the Lincoln Center Jazz Orchestra, the Los Angeles Philharmonic Orchestra, the Paul Smith Singers, the California State University Northridge Singers and Morgan State University Choir... and he did it all live.

"It's like anything, where if you don't really know each other there's a little period where you feel each other out," he says of the collaborative process. "But ultimately the musicians get along, especially the musicians who play the same instrument, like the brass players or woodwind players.

"It's just a matter of us playing and respecting. It's not like we've never seen each other. We all share the same school system, speak the same language, read the same papers, look at the same sporting events -- we have a lot in common."

Marsalis first began working on elements of "All Rise" a decade ago, even before he'd contemplated the idea of writing a classical arrangement.

"A lot of that music is inspired by different things I was exposed to," the New Orleans native says. "Like the main theme from the first movement is a song that my great uncle used to sing. The second movement is a little thing that my son would be singing." 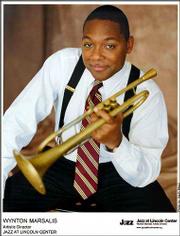 Wynton Marsalis makes a return to Lawrence with his jazz septet, which will give him a break from his recent collaborations that have involved large-scale orchestral and choral performances.

Fast forward a few years later, and the opus was scheduled to make its debut at the Hollywood Bowl on Sept. 13, 2001. Then came the attacks of 9-11.

The composer and his musicians wrestled with canceling the event, but decided that the piece's unifying themes of "striving and rising above adversity" were wholly appropriate. They went ahead with the performance despite the emotionally fragile climate, then made a studio recording of the work two days later.

So does the message of "All Rise" play into the politically charged atmosphere the nation is currently experiencing?

"Not in a direct way, but indirectly, sure," Marsalis replies. "'All Rise' is about peace. It's not endorsing a position."

And then there were seven

Currently, Marsalis is back on the road fronting the type of unit with which he is most experienced: a jazz septet. The group will perform Thursday at the Lied Center, rendering a show rife with improvisation from a set list that changes each evening.

Since releasing his first record in 1980, the 41-year-old trumpet player has been a fixture on the concert circuit, performing hundreds of dates a year. It's still a lifestyle he greatly cherishes, regardless of the inevitable drawbacks.

"This is what I've always wanted to do, so I don't feel like I've sacrificed that much," the nine-time Grammy winner says. "Maybe the familial life, because I'm touring all the time. But that's what I chose to do."

Although the artist has numerous ways of keeping himself occupied while touring (well documented in his 1994 book "Sweet Swing Blues on the Road: A Year with Wynton Marsalis and His Septet"), he takes the most solace from the comfort of return engagements.

"You develop your own connections to places mainly through people," he explains. "Just because you know one person in one city -- or this is where they took us to eat or took us to (hang out). That's what you talk about when you're on the road, 'Man, you remember we had this meal, or how we played ball after the gig in this place?'"

So does he have any memories of Kansas?

"I remember the loudest thunder I ever heard in my life was in Kansas," he says, laughing. "It was a real clap with lightning. But I can remember a lot of things: clubs we went to after playing at the Folly, Gates Barbecue."

Although the latest CD he's promoting ("All Rise") has little to do with the show he'll be delivering on Thursday, Marsalis doesn't really differentiate between what form his music is presented. For him, music is music. Jazz is jazz.

My father (jazz pianist Ellis Marsalis) told me, 'Do it because you love to do it," Marsalis recalls. "Don't put a lot of ulterior motives on it."

Some could call that prize-winning advice