A Grand Theft Auto knockoff? Or a solid original? Our full review.

Grey clouds loom, threatening a heavy downpour any second. Gritty London streets shrouded in fog beckon. A woman screams in the distance, followed by the high-pitched squeal of tires. You've entered the crime-ridden world of The Getaway. 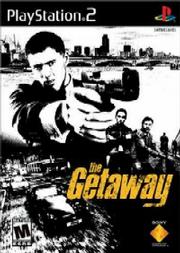 The British Grand Theft Auto? Not quite.

In The Getaway, the player assumes the role of small time criminal Mark Hammond. As the game opens, you find Mark in a bad situation. His wife has been shot and his son kidnapped by London's crime overlord, Charlie Jolson. Hammond must run various "errands" for Jolson to ensure that his son is returned to him unharmed. If he doesn't complete the missions as requested, his son dies. Jolson works Hammond to the bone, sending him on mission after mission; always keeping Mark's son dangling just out of reach. The kingpin uses Mark as a one-man weapon aimed at any opposition prohibiting him from taking over the city.

You are sent up against the Triads and Yardies, setting up frame jobs and double crosses, playing them back and forth against each other. Missions usually entail jacking a car, driving to the destination, completing the mission on foot with a gun, then jacking another car and making your escape. As you play, Hammond meets a wide variety of characters each with his or her own characteristics and agendas.

Early in the game, Mark meets up with an undercover cop named Frank Carter. As the story plays out you find yourself meeting this character more and more frequently, the two plots twisting closer and closer together. After beating the game with Mark Hammond, the player then assumes the role of Carter. You start back at the beginning and play through again watching the story unfold from a different perspective with completely different missions. The two plot lines interweave beautifully forming a story that keeps the action fresh and exciting.

The real draw to this game is its extremely cinematic feel. Any fan of "Lock, Stock, and Two Smoking Barrels" or "Snatch" will want to pick this one up. The developers strived to make the game look as much like a movie as possible, and real life British actors were hired to provide the character voices.

The actual game screen has no life bar or level indicators, freeing up the entire screen for graphics. In addition an entirely new map system was developed. Your car's turn signals flash to indicate an upcoming turn or curve that you should take to reach the mission objective. This alleviates the need to have an on screen map getting in the way of the impressive visuals. Although this system is sometimes flawed, like being sent the wrong way down every one-way street in London, it still works fairly well. Each major scene transition is accompanied by a nice CG movie that inserts you directly into the game, reinforcing the cinematic feel.

Much time was spent on the game's inspired visuals and sound. The developers mapped out all of London's streets and buildings, faithfully reproducing them in the game's final form. That means you must obey all traffic laws and street signs if you don't want to draw attention to yourself. The average gamer might find this a bit difficult since London is loaded with confusing one-way streets and turn-arounds not found in American street systems. Spending some time just driving around is recommended to familiarize yourself with street signs and road systems.

Real life British cars litter the streets, ranging from Audis and Lexuses to Taxi cabs. Each car handles differently so choosing the correct car for the mission is critical. Although the physics model for the game works well, it hiccups now and again. Every so often while driving, you'll find yourself ricocheting off a seemingly invisible object, spinning your car out of control. While it's infrequent, it can be enough to make some missions more difficult than necessary.

The game audio is raw and wonderful. Engines roar down tiny London streets, tires screaming in unison. Spent shell casings tinkle on the pavement. Best of all, during the heat of a gunfight, occasionally you'll hear Mark mutter some interesting insults after mowing down a thug.

Now, the inevitable Grand Theft Auto comparison: Grand Theft has many more objectives than The Getaway if you include the hidden packages, insane jumps and so on. It also seems to have a more developed driving system for easier car control than its London counterpart. The Getaway's "on foot" sections present a more white-knuckled action experience due to the sheer number of stealth and evasion moves Mark possesses; where in Grand Theft you can basically just walk up to enemies and mindlessly open fire. The Getaway is also much shorter and no new elements of play present themselves after completion, which drops the replay value drastically.

If you as a gamer prefer graphics to game play, The Getaway will certainly entertain you for a while. If it's game play you crave, it might not be able to provide enough to keep your interest. It's compelling story and action packed play make it at least worthy of a good renting.