New York — Virtually every musical on Broadway shut down Friday as musicians went on strike, and actors and stagehands said they wouldn't cross their picket lines.

All weekend performances were canceled, too.

"They, unfortunately for theatergoers, have turned off the lights on Broadway," said Jed Bernstein, head of the League of American Theatres and Producers.

No more negotiations were scheduled for Friday and it was uncertain when they would resume.

"We remain ready and anxious to negotiate an agreement but when they close the theaters and provide us with what they are calling a final offer, it's very hard to negotiate," said union official Bill Dennison.

Shortly before the shutdown, the actors and stagehands expressed their solidarity with the musicians.

"Our members have made it clear: We do not want to perform to virtual orchestras," said Patrick Quinn, Actors' Equity president. 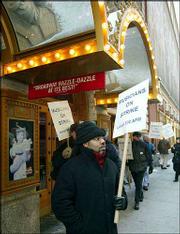 Striking Broadway show musicians picket outside the Ford Center for the Performing Arts in New York. A recording Friday at Local 802 of the American Federation of Musicians stated: "As of midnight Thursday night no agreement has been reached between Local 802 and the League of American Theatres and Producers. Local 802 musicians are on strike."

Refunds or exchanges were available, according to Bernstein.

Plays on Broadway -- such as "Take Me Out" and "Frankie and Johnny in the Clair de Lune" -- were being performed as usual, as were all off-Broadway productions. "Cabaret" was the only Broadway musical unaffected because it's covered by a special contract.

The main sticking point in negotiations with Local 802 of the American Federation of Musicians has been the question of minimums -- how many musicians are required for each show, a figure related to the size of each theater.