The global economy and the prospect of war in Iraq are the macro-concerns of the population at large, but in the fashion microcosm, brows are furrowed over the fact that the contracts of Ford and Gucci Group CEO Domenico de Sole expire early next year and neither has signed a new one.

Last Saturday night, creative director Tom Ford dutifully expressed his commitment to the company and his desire to stay but followed up with a lengthy series of conditional clauses that across a negotiating table might sound like a list of demands. Most prominent among them was to retain creative control. The fact that it has even entered the discussion suggests it is not inevitable, at least not in this economy, not when Americans have been more inclined to buy duct tape than luxury goods.

But on this night Ford, dressed in a black velvet blazer and sipping a vodka tonic, shrugged off and then shut down an unglamorous discussion of labor issues. He wanted to talk about the clothes and the importance of beauty in a time of crisis. Ford is among the most eloquent and adept at extrapolating cultural markers, philosophical underpinnings and anthropological significance from a conversation about frocks. And he dug deep to line up his references: melancholy, nostalgia, "Gattaca," "Mad Max." He might also have mentioned his own Yves Saint Laurent Rive Gauche collection for spring 2003. But then he took the air out of his own analysis by announcing, "It's just fashion."

Well, it's not really just that, because these clothes on models who glare their way down a runway quite often are the crystallization of a business agenda, popular culture, politics and a host of disjointed thoughts floating in the air. But as designers here have been unveiling their fall 2003 collections, a sense of frustration with everything that they cannot control -- politics, economics, the possibility of war and all its accompanying paranoia -- has caused them to virtually throw up their hands. "I'm embarrassed to be an American," Ford said.

Like everyone else, designers are searching for something to do, a way to make themselves useful and relevant. For the finale of the D&G show last week, designers Domenico Dolce and Stefano Gabbana sent out a parade of models dressed in rainbow-striped tank tops emblazoned with the word pace, Italian for "peace."

But really, all it seems designers can do is make pretty clothes, celebrate beauty and do the best they can to give women "something that they can't live without," as Ford says. To suggest that a designer can do anything more seems presumptuous. Possibly preposterous.

It is a dangerous thing to read subtext into wool, silk and satin. Ford himself has described his way of blending fashion and cultural moods as purely visceral. It is based on mood -- in this case a palpable but generalized upset -- rather than calculation. But it is impossible not to notice that even as designers from Ford to Miuccia Prada speak repeatedly about beauty, the reality is that the clothes offered so far are not particularly beautiful, at least not in typical ways. They are not clothes that proclaim their prettiness in delicate colors, fragile fabrics or silhouettes that are likely to cause anyone to swoon. 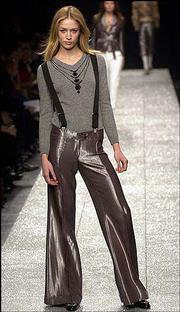 Instead, they are like extravagant personal shields or decorative armor: Gucci's buckled-up jackets, Prada's crocodile coats that rise up on the back like a protective shell, or cheerful patterned pea coats by Christian Lacroix for Emilio Pucci, behind which one can hide.

A story on the runway

All of Gucci's production flourishes signal romance, heartbreak and a damaged love life. But the clothes themselves have a harsh, dark edge. The silhouettes are extreme. Coats have collars that stand up and cup not just the nape of the neck but the entire head. The silhouette has a fullness that surrounds the hips and a waistline that is accentuated by a corsetlike belt that stretches from the pubic bone to just below the breasts. The sleeves are narrow to the elbows and then explode in volume at the upper arm, giving the effect that the coat sleeves are perpetually pushed up as if one is ready for a fistfight. The coats make a dramatic impression on the runway -- on a busy street corner they would make the wearer look like an extra in a Ridley Scott film -- and immediately pull the viewer into the fantasy Ford has constructed.

He is so good at weaving a story on the runway, so skilled at using light and music to realize a dream that it can be difficult to extract the quality of the clothes from the presentation's production values. This time, however, the clothes seem to run contrary to the message of the surroundings. These clothes express an attitude of haughty drama. The woman who wears them might be less inclined to find a bed of rose petals romantic and more likely to wonder about the exquisite possibilities in the thorny stems. Ford's magic on the runway is dark. The clothes don't accentuate a woman's curves as much as they put up a defense around them. The jackets and skirts hug the body not with a caress but with a stranglehold of straps, bands and buckles. The necklines do not plunge but almost seem to lash out, with collars standing erect in an on-guard gesture. What lies beneath the jackets and coats are dresses with seamed bodices that find their sensuality in control rather than indulgence.

Most designers are not artists -- at their best, as with Ford, they are creative businessmen -- and so it would be silly to expect to see them unveil their "Guernica" on the catwalk. But woven into these collections is a subtle sense of the loathsome toll that global unrest has taken. It is disconcerting to know that as a designer speaks of beauty, the vision that appears on the runway is of dresses so tightly fastened around the waist that they seem to be squeezing the air right out of the model. The garment may be exquisite and alluring, but to call it beautiful is to suggest that the world has become a very dark place indeed.