A husband-wife duo that ranks among the top international musicians is coming to the Lied Center.

Cellist David Finckel and pianist Wu Han, who began playing together in the early 1980s and married in 1985, will play an all-Russian concert at 2 p.m. today.

Finckel and Han have performed in some of the most prestigious concert series in the United States, including Washington's Kennedy Center, UCLA's Performing Arts Series, Stanford Lively Arts, New York's 92nd Street Y, and others. When they're not performing together, Han performs solo concerts, and Finckel is a member of the Emerson String Quartet. 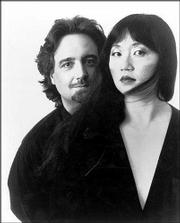 Cellist David Finckel, left, and pianist Wu Han will play an all-Russian program at a 2 p.m. concert today at the Lied Center. A pre-concert lecture will be at 1 p.m. in the Oldfather Warm-up/Dance Studio at the Lied Center. The classical musicians are married and make their home in New York City with their 7-year-old daughter, Lilian.

In fact, it was through a residency with the quartet that Finckel first met Han back in 1982. She was a graduate student at Hartt School of Music in Connecticut, where the Emerson Quartet happened to be in residence. Finckel was coaching an ensemble performing the Brahms B-major Piano Trio, when he noticed a beautiful pianist playing beyond the level of her fellow musicians. It was Han, of course, and she went on to win a contest that allowed her to perform with the Emerson Quartet.

And, thus, their romance and musical partnership began.

In addition to its U.S. performances, the duo has begun touring in Mexico, Canada, Asia, Scandinavia and Europe to unanimous critical acclaim. They also launched ArtistLed, the first musician-directed and Internet-based recording company.

Finckel and Han are regular members of the distinguished teaching faculties of the Isaac Stern Chamber Music Encounters at Carnegie Hall and at the Jerusalem Music Center. They appear annually on the Aspen Musical Festival's Distinguished Artist Master Class series.

They make their home in New York City with their 7-year-old daughter, Lilian.