It's the thick of winter, and the trunks of David Vertacnik's apple trees jut upright from the frozen sod, their bare branches outstretched against a gray Kansas sky. He can see all 95 of them from the windows of his studio, east of Lawrence off Kansas Highway 10.

There won't be apples on the trees for months. And it will be the end of March before Vertacnik can quench his thirst for working the land by preparing his vegetable garden.

For now, the fruits of his labor are rendered in works of art, specifically sculptures. The Kansas University design professor has been pouring his energy into a body of work that never strays far from his agricultural upbringing and environmental principles.

The resulting 20-plus sculptures root heavy to the floor, arch upward in patterns of growth, sway and spin in the breeze and reflect light. They also reflect a reverence for agrarian culture.

"A lot of the work is about work," Vertacnik says. "It's about labor. It's about toil. It's about a physicality and just dealing with the earth."

It's a serious subject, and Vertacnik is a serious artist. But it doesn't take long to realize he's got a wicked sense of humor and a playful personality that comes through in his work, which is on display through April 26 at the Dennis Morgan Gallery in Kansas City, Mo.

Vertacnik calls the show "Kinetic Bouquet" because many of the pieces are flower-like and have moveable parts. So the graduate school instructor who once told Vertacnik he was a visual poet might describe the exhibition as poetry in motion.

In Vertacnik's shop -- stocked with tools like a trip hammer, anvil, welder, band saw and drill press -- Vertacnik fuses together cast bronze, ceramics, found industrial objects and agricultural tools to make forms that describe and symbolize life cycles, such as fertility and growth, depletion and renewal.

"I want my sculpture to reflect the significance and vulnerability of humankind's relation to the earth in a time of increasingly dehumanized technology," Vertacnik says in his artist statement.

His concern with that relationship began at a young age. Vertacnik grew up on a 60-acre farm outside Indianapolis, where he helped his grandmother gather eggs from her chicken house, picked apples during fall harvest and observed the rhythms of nature. 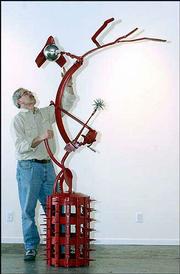 David Vertacnik tinkers with his sculpture, "Fruit of the Vine," at the Dennis Morgan Gallery in Kansas City, Mo.

He learned "what it means to live next to the land," he says. "Mother Nature, she's humbling. You go at her speed."

Later in life, he learned that his affinity for labor and the land might just be in his blood. Vertacnik is a second-generation Slovenian-American. During recent visits to Slovenia, he has witnessed the Slovenian people's connection to the land.

"This is something that's in their blood," he says. And the first time he stepped foot in the country, "It was like putting on an old pair of shoes that really feel good."

Two of Vertacnik's monumental sculptures have prominent places in an outdoor sculpture garden along the Soca River in Most na Soci, a Slovenian town.

Vertacnik received degrees from Indiana State University and the New York State College of Ceramics at Alfred University in New York and has been creating art for 35 years.

His training, like most artists, leads him to see the lines and artistic potential in everyday objects and nature.

Take his apple trees, for example: "To me, they're like 95 pieces of sculpture out there." 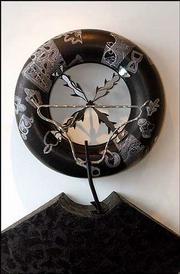 To get to his shop at the back of a massive outbuilding on his property, one walks past old buckets full of farm tools, rusty springs and scrap metal. Vertacnik sees a pile of visual vocabulary in what others might consider a useless heap.

"I admire my junk pile. I walk out there every day and look at it. Some days it talks to me. Sometimes it's just junk," he says. "As a visual person, that's my vocabulary. So I just surround myself with it."

And sometimes the objects strike a chord. After living awhile with a pile of pruned apple tree branches and thinking, "Far out! Those are pretty nice looking," Vertacnik decided it would be a great idea to "fillet 'em."

So he ran them through a band saw, taking off the top and bottom and leaving exposed wood grain that became the outgrowths on a wall sculpture called "Natural Selection." Though the piece is constructed of glass bottles and cast ceramic wrenches, the end result is flower-like.

"I like taking mechanical things and making them look organic," Vertacnik says.

Though he admits he's an "object maker," he also sees his work as narrative. The art he most admires -- surrealism, oceanic, early Iranian, Han Dynasty -- tells stories about a particular culture at a particular time.

"I'm using components that speak of our time," he says. "I'm not trying to be a conceptualist, an installation artist. But I am into the idea of the elements. I'm trying to use them in some visual manner that talks about society, that talks about us."

Or as he puts it in his artist statement: "My art is about humanity and humanity's earthbound ties."

Vertacnik, who has shown work in numerous exhibitions throughout the country, hasn't had a solo gig in a while. He's excited about the Morgan show and happy with the direction his art is taking him.

"Sometimes I worry I'm not edgy enough. Other times I think, 'You're WAY edgy,'" he says. "The biggest thing is there's something that fuels the art ... There's a desire and a passion. And I think the passion shows."