Best game of all time? Our full review.

By this time you've heard at least one person go on and on about how ridiculously awesome this game is. Odds are I am one of them. 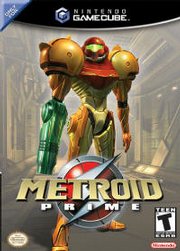 The best game in years.

Retro Studios did the impossible. They translated a 2-D beloved franchise into the 3-D realm, leaving the doubters dazed and confused with pure awe. Am I exaggerating? If you think I might be, you haven't played it. I have Retro to thank for lack of sleep for six weeks. Yes, this game is as great, if not better, than Super Metroid for the Super Nintendo, arguably the best video game ever made.

Metroid Prime finds our famous video game vixen Samus Aran exploring the trouble on the planet Tallon IV. A whole race of peaceful aliens, the Chozo, have been obliterated. Samus needs to find out why and by whom. And instead of bombarding you with countless CGI cutscenes spoon-feeding you the story, there are pieces of the story along the way you have to find and scan to uncover the mysteries of who is doing what.

I want to get this out of the way. Prime is not a first-person shooter. The casual gamer might be quick to call it one, but it is dubbed a "first-person adventure" by Retro Studios and the diagnosis couldn't be more perfect. There is no multiplayer. There shouldn't be. You explore, find and figure out just as much as you shoot, bomb and kill. Multiplayer modes would make no sense whatsoever. There is one control stick to move and turn. Strafing is accomplished by using "L," the lock-on button, a la The Legend of Zelda: Ocarina of Time. All of these qualities are executed so well that it's impossible to play it and come away to compare it with the likes of Halo or Goldeneye. Metroid Prime is not only in a class of its own, but 2-3 years ahead of its time.

Your main objective in Prime is to discover who experimented on and exterminated the Chozo and why. As you blow the crap out of your bosses and enemies, you also must gather twelve artifacts along your entire journey to return them to their elder statues to open up the "final battle" if you will.

You find different visors along the way to help you solve puzzles and beat bosses. You start off armed with the scan visor, but later on you obtain an X-ray and a heat sensing visor. You switch between the visors using the D-pad. It's simple.
Your arm cannon starts off with a basic power beam. Later you will find ice, wave and plasma beams and also powerful charge-type upgrades for each beam that come in really handy. You switch between arm cannons by using the C-stick. You also start off with a modest supply of missiles. You can carry more missiles when you find one of the several hidden compartments scattered throughout Prime.

Encountering an enemy is much like the fight system in The Legend of Zelda: Ocarina of time. You lock on with the L button and can circle your enemy while jumping sideways and shooting. Jumping has always been a sore spot for many first person perspective games. And in Prime, there is much platform jumping to be done, but don't fear. The jumping system makes use of the camera quite well. The higher you jump, the more the camera slightly tilts downward so you can see exactly where you are jumping. It works so flawlessly that when you miss a jump, you admit that it was your stupid fault and not the camera system.

Oh yeah, there are no "levels," There are several worlds, huge worlds for Samus to explore from the snowy Phendrana Drifts to the ancient Chozo Ruins to the lava filled Magmoor Caverns to the Dark Phazon mines to the main tropical Tallon IV overworld. There is another level that I don't want to spoil. You can't get to certain parts of one level until you beat a boss or find an item in another. This results in what could be looked upon as backtracking, but is in no way tedious because you more than likely missed many secrets along the way. (Listen for the low hum of the hint alarm).

Also there are virtually no loading times. Retro Studios hid them during gameplay. When you are taking an elevator to a different world, the new world loads, streaming in the background as you watch Samus go down the elevator. But it just seems you are going down an elevator. The brilliant loading technique really makes the game seem as big as a planet.

There is tons of action in this game, but equally as exciting are the puzzles. The early puzzles are creative but easy. However the deeper you go into Prime, the deeper you need to go in your brain to figure out a puzzle. They are so well designed that there is no room for accusing Retro Studios for being cheap, trying to fool the gamer. Plus, sometimes the whole room you are in is one big puzzle. To solve many of them you have to get creative with your morph ball.

This game is huge and beautiful.

Yep. The morph ball is another astonishing aspect of the game Retro hit right on. Pressing X rolls you into a ball, switching your perspective to third-person. You use your control stick to roll around, sometimes in a half pipe gaining momentum on each side like Tony Hawk, to reach high places. Later you find power-ups for a speed-burst charge, super bomb and the most impressive spider ball. The spider ball feature lets you magnetically attach yourself to various tracks scattered in Prime to find secrets, avoid traps and get to certain puzzle triggers.

Jaw-dropping. The outside areas go on for miles with no pop-up. Textures are lush and beat out Halo as far as vivid color. The architecture is ridiculously original and ornate. You can shoot down harmless birds that fly innocently in the air for no apparent reason.
When rain hits your visor, the droplets look real. When a big explosion happens close to Samus you can see her face reflected in the visor. When you use the X-Ray visor and she gets hit, you see her bones when she shields her eyes with her arm. When the light of day peers through the cracks or when her spider ball rolls in a dark passage, the reflections, hues and saturations all react with precise physics. I could go on for days but you get the picture. The bottom line is the attention to detail is unparalleled. You won't see a more graphically intense game for a couple of years. IT also runs in progressive scan 480p for those who have capable TVs and the Gamecube component cables.

The bosses are huge and brilliantly designed. Many of them aren't easy.

Eerie. Creepy. Perfect. The techno/industrial aura is exactly what a Metroid game warrants. No cheery melodies here. All explosions boom, all guns blast and all beings die with the whizzes, bangs and cries you would expect. Also it's encoded in Dolby Pro-Logic II for those who want to know when an enemy is shooting from behind and to the left. Unfortunately the music loses the race to the graphics in the originality department, but it would be hard to beat the most beautiful graphics I've ever seen in a game.

The coolest looking start screen. Intuitive interfaces. A story that you discover. Sci-Fi oozing from every sound effect and graphic particle. You can unlock the original Metroid, link it up to the Game Boy Advance for more extras and unlock art galleries. I'm hooked.

The magnetic spider ball is one of my favorite parts of Metroid Prime.

Best game ever made? Easily. It's a tie between this and Ocarina of Time. I lost as much sleep. I spent at least 15 hours beating it the first time and came away feeling satisfied from every video game pore in my soul that yearns for solid content. When I started playing other "just good" video games again, I felt cheap.

Gamecube just a kiddie machine? Don't be that naive.