New York — After a four-day walkout that cost the city $10 million, Broadway musicians settled the first strike on the Great White Way in nearly 30 years Tuesday by agreeing to cut the number of orchestra players a show must hire.

The breakthrough came during an all-night negotiating session set up by Mayor Michael Bloomberg as the walkout by about 325 musicians began costing theaters, restaurants and hotels vital tourism dollars in a city already ailing financially.

"Broadway is no longer dark," Bloomberg said in announcing the agreement that allowed 18 musicals, including "The Producers," "The Lion King," "Mamma Mia!" and "Hairspray," to resume Tuesday night.

Crystal Heitman, a student on spring break from the University of Notre Dame in South Bend, Ind., said she started screaming after learning the strike had been settled.

"I've always been a big fan of musicals and one of the big reasons that I came up here this week was to see a show," she said.

Broadway's economic contribution to the city is estimated at more than $4 billion yearly.

The strike, which began Friday and was honored by actors and stagehands, shut down all but one of Broadway's 19 musicals. By Tuesday, it had cost the city $10 million in lost box-office receipts and revenue from other businesses, according to city tourism officials.

At the center of the dispute was the number of musicians required for a Broadway orchestra. The union agreed to reduce the minimum in the 13 largest theaters to 18 or 19 musicians, down from 24 to 26 in the very biggest houses.

"The musicians had a very strongly held artistic belief, and so did the producers, about how to determine the right size orchestra to play for a particular project," said Jed Bernstein, head of the League of American Theatres and Producers. "I think both of us are very confident that we got to a good place." 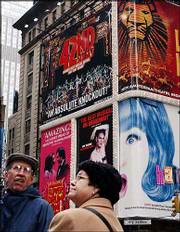 Patrons stand in line at the Times Square Theatre Center in New York to purchase tickets to various plays. Settlement of a strike by Broadway musicians Tuesday allowed 18 musicals to resume Tuesday night.

The mayor brought the two parties together after they failed to talk during a long weekend that saw musicians, actors and stagehands on picket lines and disgruntled theatergoers lining up for refunds or ticket exchanges. The final round of negotiations lasted nearly 12 hours.

"Both sides understood that they had to resolve this," said union official Bill Dennison. "There was no escaping finding a solution."

Although the new contract is for four years, the minimum number will remain in effect for a decade, said Bill Moriarity, head of Local 802 of the American Federation of Musicians. Union members will vote on the offer later this week, most likely Saturday.

When the strike began, producers vowed to keep shows running and replace the musicians with computer-generated virtual orchestras. But when Actors' Equity, the performers union, and the stagehands refused to cross picket lines, the musicals had to close.

The last time Broadway musicians went on strike was in September 1975, when nine musicals were shut down for 25 days.