Finally, a Survival-Horror game that actually gives you the creeps.

By by Dustin Hall - gamer contributor

If you've ever sought a video game that seemed more like an epic, look no further than Eternal Darkness. 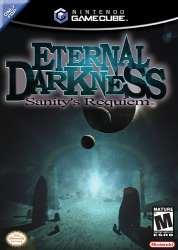 A game that will actually scare you.

Eternal Darkness focuses on the adventure of Alexandra Roivas as she struggles to uncover the death of her grandfather. Alexandra's investigation leads her to a secret room containing the Tome of Eternal Darkness, a book with remarkable magic power and a history stained with blood.

Eternal Darkness does a fantastic job in revealing the dangers and hopelessness of confronting the ultimate of evils, the Ancients, who are evil deities of great power possessing an unfathomable malice towards mankind. Players assume the roles of characters ranging from Aztecs to Gulf War firefighters. Each personality has its own strengths and weaknesses, and each will be forced to sacrifice themselves to stop the oncoming darkness. The first of these characters you play as is Pious Augustus, a Legionnaire of the Roman Empire, destined to become a Lich and your arch nemesis. The decisions you make as Pious decide which of the three branching storylines you will follow. Each one is slightly different, and if you play through a third time, there is an alternate ending to be found.

In many ways, the game resembles Resident Evil, even down to the creepy mansion where it is set, but there is a great deal of improvements that set it apart from your typical survival/horror game. The aiming system is the first noticeable difference, highlighting where shots will land, and allowing quick and easy cycling between targets, including head shots.

From the start, you know you are in for an intelligent and creepy presentation.

The Magic, or Magick as it is called in the game, is also very original. By finding runes hidden throughout the game and combining them in certain arrangements, players can essentially create their own spells of varying power and complexity. These range anywhere from simple healing to invisibility. Given some exploration and experimentation, you could find yourself with some very powerful combinations.

The most interesting innovation Eternal Darkness has to offer is sanity. In addition to the standard health and magick meter, players also have a gauge that measures how close each character is coming to living in the little rubber room. As you run into monsters, you lose your mind piece by piece. Killing the monsters gains a little sanity back, but if they don't receive the finishing blow, your sanity stays gone. Game effects occur as you start go nuts, messing with both your character and you in strange psychological fashion. Your character will sink into the floor or lose body parts at random. Strange screams will echo from bleeding walls, and to top it all off, your save file has been erased...or has it been? Silicon Knights outdid themselves, trying to make a complete paranoia based playing experience. It's very tense and always very, very fun.

While not as impressive graphically as Capcom's new Resident Evils, the animation is much smoother and more natural. Camera angles are preset, but track and adjust along with character movement to create a much smoother game experience.

ED has a much better fighting system than any survival horror game.

Backgrounds are a bit limited, as there are only four or five settings for the dozen or so characters to share, but there is attention played to the passage of time on these areas, so each play will feel a little different. However, the settings are perfectly accompanied by a dark and atmospheric soundtrack. The music is very mellow and eerie; it provides a feeling that reminds one of an Indiana Jones movie set in Purgatory.

On the whole, the game is a little easy for experienced gamers. But Eternal Darkness is certainly worth the play. With great graphics, game play and sound, backed by a strong and involving story, little more could be asked for. It's a horror survival game that doesn't seek to keep you guessing at inane puzzles for hours on end, it focuses on what it should, inspiring fear in the hearts of excited gamers.

The range of character in ED is incredibly well executed.