Another great Mario entry, but not as groundbreaking

Mario is back, and looking better than ever. Nintendo's newest installment in Mario's seemingly endless adventures has him once again saving Princess Peach from the hands of evil. Your primary target is a shadowy version of Mario, who's been running amok, painting the town with sentient sludge, but since Peach is his prize, we can only guess that Koopa is involved. Mario, deemed responsible for the actions of his doppelganger, is forced to clean up and fight for Isle Delfino. 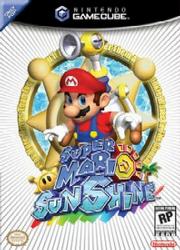 The island, the water, and all the inhabitants of Delfino look incredible. In fact, Super Mario Sunshine is an incredibly smooth game. Nintendo demonstrates once again that they know exactly how a game should be made. Despite their reputation as a 'kid company' Nintendo has a solid reputation as the 'best company' which is often overlooked by skeptics. One comparison between the smooth animation, rounded characters, and fantastic lighting in Sunshine to any other game in the market should be proof of this. Add in a quirky and fun soundtrack, and you've got the groundwork for a winner.

Sunshine plays in ways that are very similar to Super Mario 64. To a great extent, Mario's repertoire of moves is unchanged. He did manage to pick up a few an improved backflip and a jumping wall climb, ala Crouching Tiger Hidden Dragon. Not bad for such a 'husky' young man. However, in addition to his acrobatics, Mario has a very handy tool in his water pump. The pump Mario has strapped to his back allows players to smash some Koopa butt in new and fun ways. He can create rocket boosters, hyper jets, and spray his opponent both with a single stream and a variety of spinning techniques. When you're fighting enemies made of living paint, water becomes a lethal weapon.

For added fun, Yoshi remains a presence. Unfortunately, he can't be taken into the main levels, but by vomiting fruit on various barriers, everyone's favorite dinosaur can open new levels and secret coin stashes.

The levels themselves are fun, original, and challenging. They vary from combat to on a giant mirror with a series of overgrown worms to racing on the backs of surfing squids. A few levels are entirely based on challenging obstacle courses, which can be difficult for any gamer with less than perfect reflexes. The great homage to the original Mario theme is a very poppy and appropriate music selection for these stages.

Those who didn't like Mario 64 will find Sunshine lacking in a few crucial areas. For one, the camera is absolutely horrendous. Mario's levels are beautifully detailed and have many surprising twists and turns to be explored. It's unfortunate that the camera doesn't share in Mario's enthusiasm for exploration, and tends to lag behind, stuck to a wall, or obscured behind a green pipe.

Great textures abound...most of the time.

The game's main purpose, aside from rescuing the Princess from the ultimate stalker, is collecting coins and 'shine sprites'. Coins equal life to Mario, nothing new there. Blue coins give not only vitality but also additional sprites. And more sprites unlock new levels. The problem with this format is that it's really overdone. Most platform games, especially the 3D ones revolve around a principle of hunt and collect. The collection of sprites allows players to choose which levels they want to play and when with a bit more freedom, but it's still a tedious task for older gamers who want a more defined mission. Also, for a game directed towards younger Mario fans, the game requires an amazing amount of hand eye coordination and excellent timing to a degree only veteran gamers possess.

These flaws aren't enough to ruin a good game, though. Sunshine is fun from the get go, providing great adventure, fun boss fights, and uncommon challenge for a 'next gen' game. While it's not for every gamer, a majority of game fans know and love Mario, and if he's won you over in past games, then this one should fare just as well.