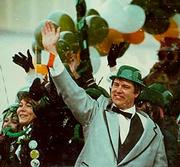 James Michael "Jimmy Mack" Jones had all the makings of an Irishman.

He celebrated every St. Patrick's Day with corned beef and cabbage and beer. He played the guitar and the spoons, no matter that he lost his right hand in a railroad accident when he was 18.

This year's parade will include music from The Junkyard Jazz Band, a Dixieland and blues group that has performed in all 16 parades. Trombonist John Weatherwax, 82, said more than 85 musicians have played with the band since it began in 1980. The ensemble's current lineup includes members ages 50-85 from Lawrence, Kansas City, Topeka, Coffeyville and Emporia.

"We've lost a lot of them, but we'll keep going as long as there's people to play," said reed player Clyde Bysom, 85, who first performed music with Weatherwax in 1938 when both were attending KU.

Weatherwax said the act favors tunes written by Duke Ellington, Cole Porter and Irving Berlin but plays traditional Irish songs such as "My Wild Irish Rose" for the parade.

"We don't use sheet music," Weatherwax said. "It's all in our heads."

A tribute to Mack

The idea for the parade stemmed from a conversation between Wilson and Jones about how it was absurd for Lawrence residents to drive to Kansas City or Topeka to attend one. The group's biggest hurdle was convincing the Lawrence police to tie up traffic across the bridge.

"The city didn't want anything to do with it since it started and ended at a bar," Wilson said.

So the men hatched a plan. They would charge for floats and donate the money to the police's favorite charity: March of Dimes. The plan worked. The police agreed to issue a permit, and the inaugural parade drew hundreds of people (or thousands, depending on who you ask) and raised $800 for March of Dimes.

That charitable spirit has endured through the years. Parade committee co-chair Deb Drummet estimated the fund-raising events surrounding the parade -- an auction, dart tournament and "Shamrock Shuffle" race -- have raised more than $200,000 for children's charities in 15 years.

This year, the committee expects to donate more than $20,000 to the Boys and Girls Club of Lawrence.

"Over 100 people volunteer their time, talent and sweat to pull this thing off every year," said parade chairperson Philip Bradley. "There's no office, no staff. Everyone gives until it hurts."

The parade will begin at South Park and end at The Flamingo Club. The committee agreed to move the parade downtown in 1995 at the request of city commissioners and local businesses.

Brenda Jones will command the "Jonesy Party Float" in tribute to Jimmy Mack. She said building the float had been more challenging than she expected.

"You have to get a garage to store the thing, a vehicle, a trailer, donations, ideas, labor and a lot of Bud Light," she said.

She is also selling T-shirts to raise money for the "Jimmy Mack" Jones Football Scholarship Fund, which provides support for KU student-athletes. The T-shirts are for sale at Cactus Jones, 534 Frontier.