One was "Cabin Fever," the subject of a bidding war at last year's Toronto International Film Festival that eventually went to Lions Gate Films for $3.5 million. The other was "The Eye," a Hong Kong film that Tom Cruise's production company plans to remake.

Both have relatively unknown actors and small budgets, but they represent a return to old-school gore and suspense that the festival's audiences found irresistible.

Writer-director Eli Roth's "Cabin Fever" is about five college friends who go on vacation to a cabin in the woods and end up being infected by a flesh-eating virus. The best-known cast member is Rider Strong, who co-starred in the '90s teen sitcom "Boy Meets World."

About 100 people were turned away from a midnight showing this week at the Alamo Draft House. Those who managed to get a seat screamed, laughed and hollered at all the right places -- and afterward, when Roth addressed the crowd, he received a deafening ovation.

"That was the best -- sitting there with people going crazy and applauding," he said. "Everything I had in my head worked." 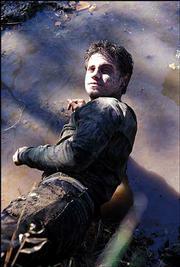 Rider Strong appears in a scene from the horror film "Cabin Fever." Midnight screenings of "Cabin Fever" and "The Eye" -- another horror flick -- drew some of the biggest buzz this week at an otherwise low-key South by Southwest film festival in Austin, Texas.

A 30-year-old protege of director David Lynch, Roth said the pacing and cinematography of "Cabin Fever" were influenced by the slow, moody horror films of the 1970s and early '80s, like "The Texas Chainsaw Massacre" and "Evil Dead."

He wanted to avoid the slick, speedy style of recent slasher flicks like "Valentine."

"They're edited way too quickly, with the exception of 'Signs,' '(The) Blair Witch (Project),' 'The Sixth Sense,'" he said. "They're way overedited, way overlit, they use rock songs instead of a score, the acting is terrible."

"The Eye," from brothers and co-directors Oxide and Danny Pang of Thailand, also packed the Alamo Draft House at the film festival, which ends today.

Scheduled to arrive in U.S. theaters in June, it's the story of a blind woman who undergoes a cornea transplant to restore her sight and soon starts seeing ghosts.