She finishes at 6 a.m., gets her sons ready for school and drops them off.

That's when the literary morsels that have been floating around in her imagination make their way onto paper. Strong men whisk away beautiful women. Highly skilled warriors spar to settle differences.

Fitzgerald gets so caught up in the fantasy that she has to set an alarm clock to remember to retrieve her children. Writing has been her means of escape since she was a child herself, and most of her work falls into the steamy romance/fantasy category.

"I think I like a happy-ever-after story because that's not the way life really is, at least it hasn't been for me," she says.

Fitzgerald, a 1991 Kansas University graduate and divorced mother of three, is a fledgling author. Her first book, "Nuworld," was published in January by Amber Quill Press, a small Internet-based publishing house. Since she quit her full-time job as a property manager five years ago, she has written "Nuworld" and five other novels in a six-book series under the pen name Lorie O'Clare. The next book, "Tara the Great," will be released in July.

Breaking into the publishing industry has been an uphill battle for Fitzgerald, 37, but she says the end result makes the struggle worthwhile.

"Getting published is one of the hardest endeavors I have ever taken on. I have learned how to get tough after receiving more rejection letters than I care to count," she said. "Persistence pays."

Fitzgerald's idea for the science fiction/romance "Nuworld" originated from a Bible study, of all places. About five years ago, she was doing an outline of the Old Testament for a study group at St. John the Evangelist Catholic Church.

"In my warped, wild imagination, I saw clans, races, nations who were traveling their land, discovering new places, running into people they had never met before, fighting to take what they had a need to have," she says. "It was normal for a man to have four wives. Today, that's illegal. 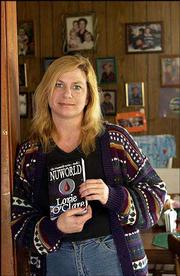 Laurie fitzgerald's first book, "Nuworld," was published in January and is the first in a six-book romance/science fiction series. Fitzgerald published the books under the pen name Lorie O'Clare.

The futuristic book follows Tara, a member of the nomadic Runner race, who poses as a member of the territorial, male-dominated Gothman race so she can learn more about their culture.

The two cultures are very different. Gothman people are oblivious to the world outside their own. They view women as property that can be "claimed." Runners, conversely, view people according to their abilities rather than their gender.

Though Gothman law mandates shooting on site any Runner who enters Gothman lands, Darius, the leader of Gothman, breaks that rule because he is intrigued by Tara, whom he recognizes as a Runner despite her disguise.

"And obviously, since its a romance, she's beautiful," Fitzgerald says. "Darius is captivated by her, not to mention lusts after her. He sees someone who does not appear to be an enemy. She's intelligent. She can take on other men in battle. He's never known another female like this."

And so romance ensues.

Fitzgerald's story is a bit less romantic. She grew up in Topeka and moved to Lawrence when she was 17 to attend KU. She worked full time to put herself through school and eventually received degrees in English and political science.

When she graduated in 1991, she immediately got married and had three children. She worked at McDonald's and then as a telemarketer to make ends meet. She's been divorced for two years.

She quit her day job as a property manager and took on paper routes so she could stay home with her children and devote time to writing.

"It was a big step," she says. "Now I'm home all day. I can be there for my children, and while they're in school, I write."

Since completing the "Nuworld" series, Fitzgerald has written five other novels that are "more action-paced, suspense type romances," all under her Lorie O'Clare pen name.

"Lorie O'Clare is the hardcore writer who can sit down and diligently stay with a project until it's done," she says. "Lori Fitzgerald can be a frazzled mom."

She's in the process of trying to sell those books. It's tough, she says.

"I think it was Carol Burnett who described giving birth to a baby as similar to taking your lower lip and pulling it over your head," she says. "Creating a one-page synopsis of a 400-page book is a similar process."