Baltimore — The man who revolutionized ballet wasn't a choreographer. He wasn't a dancer or a composer or an artist.

He was a portly Russian impresario named Serge Diaghilev, who, from 1909 until his death in 1929, inspired the world's best artists, composers, choreographers and dancers to create works of magic that transcended traditional ballet -- the Ballets Russes.

"It must have been an astonishing experience," said dance historian and critic Lynn Garafola. "There was this wonderful visual unity, the imaginings of so many fine painters. Coupled with the music and dancing, you must have felt that you were being absorbed into a voluptuous world, that all your senses were being catered to."

The "Art of the Ballets Russes" is on view at the Baltimore Museum of Art through May 4. It offers a tantalizing look at Diaghilev's wondrous creation. The exhibit is part of "Vivat! St. Petersburg," Baltimore's celebration of the 300th anniversary of the founding of Russia's capital of the arts.

The show contains more than 100 costumes, set designs, drawings and paintings on loan from the Wadsworth Atheneum Museum of Art in Hartford, Conn. It's about half the museum's collection, much of which is usually kept in storage because of the fragility of the costumes and drawings.

"These are works of art by the greatest artists of their time," said Wadsworth archivist Eugene Gaddis. "They document, certainly, one of the most creative collaborations in the history of art."

Before Diaghilev, European ballet was often relegated to music halls, wedged between vaudvillelike comics and magicians, Garafola said. Diaghilev moved from St. Petersburg to Paris in 1909, looking to introduce his new version of Russian ballet to Western audiences. His experiment reinvented the way ballet was performed and imagined, paving the way for an explosion of interest in modern dance and ballet in Europe and the United States.

Visitors to the exhibit are welcomed with a burst of color and sound. Two mannequins are posed in a frenzied, leg-kicking Asian dance, dressed in yellow satin jackets painted with red flowers and billowy red trousers stenciled with gold. The costumes were designed by Bakst for "Scheherazade," the first original ballet produced by Diaghilev, which caused a sensation when performed in 1910 in Paris.

On the surrounding walls hang paintings and drawings depicting costumes and sets from corresponding ballets. One of the show's joys is to leisurely examine the intricate seams, colors and material of the sumptuous costumes and then see the black-and-white photographs of the show's original dancers wearing the same costumes. 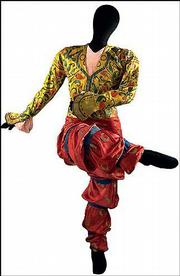 This "Costume for an Adolescent," from "Scheherazade," shown in this undated photo, is among the items in "Art of the Ballets Russes," an exhibit at the Baltimore Museum of Art through May 4.

Music by Nikolai Rimsky-Korsakov, Claude Debussy, Tchaikovsky, Stravinsky and other Ballets Russes composers plays during the exhibit, adding to the sensory overload Diaghilev hoped his audience would experience.

"Diaghilev dreamed of creating a unified theater, a place where music and art and dance could be combined in a feast for the eye and ear -- some magical sharing, where the whole is more than the sum of its many parts," Garafola said.

In another room, a costume originally designed by Bakst for the great Russian dancer Vaslav Nijinsky is worn by a leaping mannequin, suspended in mid-air with its arms and legs fully extended. The costume, designed for the 1911 Mikhail Fokine ballet, "Le Spectre de la Rose" ("The Specter of the Rose"), consists of a worn pink leotard and a cap and jersey covered with red, pink and purple petals. Legend has it that the ballet was so popular, fans stripped an earlier version of the costume of its petals.

One of the show's most extraordinary pieces is a vivid 1912 Bakst drawing of a costume for "L'Apres-midi d'un Faune" ("Afternoon of a Faun"), also designed for Nijinsky. Bakst's brilliant graphite, tempera and gold paint picture shows a young faun, wearing white tights covered with large, black bovine spots. A long, flowing blue scarf spotted with aqua and gold snaillike patterns and flecks of gold twists around the faun, who gazes lovingly at a grape vine he pulls toward his face.

"Matisse was responding to the restraint he found in the music," said Garafola. "This was his distillation of traditional Chinese costuming."

Diaghilev's genius was partly his ability to select brilliant artists, such as Matisse and Picasso, and let them work without restrictions, Garafola said. The exhibit includes an ink sketch by Picasso evoking a Spanish street scene for "Le Tricorne" ("The Three-Cornered Hat"), first performed in 1919.

The BMA show is designed to create the sense of being enveloped by a fantasy world sprung from these artists' imaginations -- just the sensation Diaghilev most wanted to elicit from his patrons.