Minneapolis — For author Louise Erdrich, the funky furnishings of her bookstore in south Minneapolis could be a metaphor for her life.

She points to her chair, rescued from the trash and reupholstered. A birch from a Wisconsin blowdown extends its branches toward the ceiling. Nearby, a massive wooden confessional is dubbed a "forgiveness booth" in which customers can sit and read.

All are part of Erdrich's desire to keep her store environmentally friendly.

"That's our theme: trash to treasure. It's the theme of my life. That's it," Erdrich says, chuckling.

Erdrich is in a merry mood as she talks about her eighth novel, "The Master Butchers Singing Club," which recently was published to glowing reviews. Besides her bookstore and writing career, she also has a 2-year-old daughter to keep her busy.

"I wrote this whole book, practically, while pregnant. It was estrogen-powered," says Erdrich, 48. (She refers to her daughter's father only as "a wonderful partner.")

While her previous works have focused on American Indian themes, Erdrich's latest deals mainly with the European side of her family.

"I've always wanted to write this book," says Erdrich, whose father is German-American and her mother French-Ojibwe. "I got to talk to my father a lot about sausages, and that was so much fun."

In the book, Fidelis Waldvogel is a former sniper who fought for the German army in World War I. Inspired by a machine-cut piece of bread he receives after the war, he travels to America with a suitcase of sausages and butcher's knives, making it as far west as the fictional town of Argus, N.D., scene of other Erdrich books.

Waldvogel marries the pregnant fiancee of his best friend, who is killed in the war. After the birth of the child -- a boy -- the couple has three more sons. When World War II erupts, some of the boys end up fighting for Nazi Germany, some for the United States. 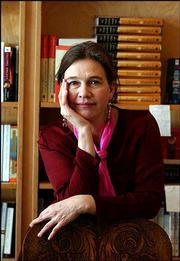 The book is peppered with fascinating characters: Delphine, the daughter of the town drunk, who acts as the "human table" in a vaudeville act with Cyprian, the French-Ojibwe acrobat who hides his homosexuality; Eva, Fidelis' wife, who becomes Delphine's surrogate mother; and Delphine's friend, Clarisse, the undertaker with the theatrical bent.

There is also a dark side to life on the Depression-era prairie -- rotting bodies found in a cellar, a sheriff murdered, a boy trapped in a hill cave-in.

"People imagine small-town life as so secure," Erdrich says, "and yet there's a good deal of darkness and sorrow in people's lives, even in the most idyllic of small towns."

While the book's cover features a photograph of her grandfather, Ludwig, who did fight in the trenches on the German side in World War I, Erdrich says the main character -- who organizes the town's men into a singing club -- is fictional.

"I mostly remember the taste of the sausages that only he could make, and him as a massive presence," she says of the grandfather who died when she was a girl.

Formula for a story

Erdrich was born in 1954 in Little Falls, in central Minnesota, and grew up in Wahpeton, in the southeastern corner of North Dakota. She periodically returns to the flatland of the Red River Valley, where her parents still live.

"There's something about that vastness and everything, and the smallness of one's self. It's reassuring to me. Some people don't like it. But I love it," she says.

She grew up the oldest of seven children. She remembers her father, Ralph, would give her a nickel for every story she wrote. She worked at odd jobs, including hoeing sugar beets, but knew she was cut out only for writing.

"I'm kind of a grateful writer, you know. I'm not a tortured writer. Even if I'm tortured, I'm grateful for being tortured that way rather than by very hot sun," she says. "Anything is better than hoeing beets."

Erdrich didn't leave the Red River Valley until 1972, when she attended Dartmouth College in Hanover, N.H. She recalls the colonial town and Ivy League school as feeling like a stage set.

"I was constantly trying to disguise the fact that what I really knew was hoeing sugar beets," she says with a laugh.

She published a poem in Ms. magazine when she was 23. "For the next five years, nothing," she says. Out of desperation, she began looking at women's magazines that published fiction and paid well.

"And I thought, 'Well, darn it, you know, I'm going to figure out how to write this kind of story and write it.' And I did it," she says. That formula helped her learn how to tell a story.

"Jacklight," her first book of poems, was published in 1983. The following year her first novel, "Love Medicine," won the National Book Critics Circle Award. In 2001, her novel, "The Last Report on the Miracles at Little No Horse," was a finalist for a National Book Award.

A tall, striking woman with brown eyes and gray-streaked hair (she describes herself as traveling "incognito as a Native person"), Erdrich says her mixed heritage allows her to remain an outsider in her writings.

With her success also has come sadness. In 1997, her estranged husband and writing partner, award-winning author Michael Dorris, killed himself in a motel room in Concord, N.H. After his death, it was disclosed that he faced a child-sex abuse investigation in Minneapolis. (Erdrich has said Dorris had been suicidal for years and that his death should not be blamed on the allegations against him.)

Erdrich says the trauma of Dorris' death will always be with her and her family.

In 1999, Erdrich and her daughters cleaned out an old dental office near Lake of the Isles in south Minneapolis to start a bookstore. Birchbark Books features a wide range of American Indian authors, including a wall of Erdrich's books.

"We're trying to break even. We're kind of nonprofit, inadvertently, not on purpose," Erdrich says, acknowledging the competition from Amazon.com and big chain booksellers.

While saying her writings are not political, Erdrich looks at her store as a political statement. She wears a pink scarf around her neck, a symbol of Code Pink, a women's group calling for peace as the United States stands on the brink of war with Iraq.

"I think what I sort of took away from writing the book was the fact that I'm another generation removed from the war, and yet I think everybody is affected by a war, by the horror," she says. "It's unforgettable, it's indelible, and it reaches down through generations. It's not a clean, surgical experience."