Give peace a glance

A young woman dressed in the black-and-patch regalia of punk pieces together cardboard with packing tape. Across the room, a handful of other people tear newspapers into strips and paste them to inflated balloons. Serene music plays beneath the hum of their conversations. 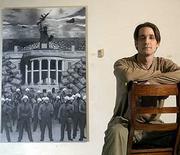 KU student artist Matt Ridgway has created a painting called "Homeland Security" in response to the atmosphere of impending war. The painting is located at the Grimshaw Gallery, 731 N.H.

The upbeat mood belies the somber reality of the group's project. They're making skulls, caskets, rodents -- even contemplating spare body parts -- in preparation for a mournful vigil they'd rather not attend.

But with troops accumulating and talk of deadlines and ultimatums, war seems almost certain, and these Lawrence residents want to be ready to voice their disapproval, their sadness, in a visual way.

Bob Gent, a Lawrence glassblower, quickly reasons: "I think it's about facing up to what we're doing. There will be civilian deaths."

This group, which calls itself 4-1-1, has been meeting at the East Lawrence studio of artist Dave Loewenstein since early January, creating anti-war art for display at Saturday peace rallies organized by the Lawrence Coalition for Peace and Justice.

Lawrence artists Stan Weil, left, and Bob Gent apply paste to a giant paper machet skull. Both Weil and Gent object to a war with Iraq and are using art as a means of voicing thier dissent. On Tuesday, the two Lawrence residents teammed up with other community artist in David Lowenstein's studio to create skulls, seen in foreground, which will be used during upcoming war protests

They're not alone. In quiet studios across Lawrence, artists are making loud statements against the specter of war.

Images convey messages that words can't, says painter and Kansas University senior Matt Ridgway. He feels obligated to use his gift to say something meaningful.

"I decided about a year and a half ago that I couldn't justify art for art's sake for myself anymore," he says. "I just knew things needed to be said, and I have the ability, so I do feel responsible."

Ridgway's prodigious response is "Homeland Security," a person-size painting hanging at the Grimshaw Gallery, 731 N.H. It depicts a fortress-like White House flanked by heaps of money and guarded by police in riot gear. In the background, a semiautomatic weapon replaces the Statue of Liberty's torch, and a sky full of bombers flies toward the American shore.

"I kind of wanted the sense of the piece to be almost as if the bombers are facing the enemy and the enemy is you," he says. "I wanted everything to seem very imposing. I don't think we're just bullying other countries. We're bullying around our own citizenry."

Lawrence artist Dawn Stender works on a papier-mÃ¢che skull in an east Lawrence art space decorated with anti-war paintings. She and other community artists are creating art to voice their opposition to war. Stender was part of a group working to create anti-war artwork Tuesday at David Loewenstein's studio, 411 E. Ninth St. Below are examples of handbills being circulated by a Lawrence artist who opposes war.

Ridgway plans to make a screenprint from the monochromatic, gray-and-black painting and put it on T-shirts. In the mean time, he's been distributing more accessible antiwar art in the form of notecard-sized handbills. The cards contain images of U.S. political figures and original artwork by Ridgway, as well as biting political satire.

"I like these because they're fairly cheap to make. I just pass them out for free and ask people to put them someplace people can see them," he says.

Like most of the Lawrence artists creating work with antiwar messages, Ridgway believes his images offer a more reasonable alternative to those that come from the government and media.

"I feel like people are very misinformed. They're purposefully kept that way. It's hard to break through the mass media," he says. "This is my attempt to subvert that. This is my protest."

Lawrence artist Lora Jost's protest also comes in the form of a postcard-style work of art. The image of a parent and child, enveloped cheek-to-cheek in a scarf, was inspired by a recent walk with her 11-month-old son, Nicholai.

"We were walking downtown and all of a sudden, it just started snowing. It was the most beautiful, wonderful, gentle snow," Jost says. "I was struck by the snowflakes on his eyelashes and the black scarf I was wearing.

"It's a beautiful little piece. I was thinking it would be nice to have a more gentle image out there that was against war."

Jost printed 500 copies on postcards that say "Everyone deserves peace on earth" and plans to pass them out, asking recipients to mail their cards to another state to spread the message of peace.

During the Gulf War, Jost was a graduate student at the University of Wisconsin-Madison, where she and most art students created loads of work in opposition to the war and even mounted an exhibition with work by hundreds of community members. She guesses plenty of Lawrence artists are working under the radar screen on art that deals with their feelings about impending war.

"This is on everybody's mind," she says.

Smack in the face

Back at Loewenstein's studio, where work continues on the skulls and coffins, Gent recalls his late-January journey to Washington, D.C., where he added his voice to thousands of others in opposition to war with Iraq. When he returned home and began flipping through snapshots of the rally, it wasn't the words of pro-peace chants that resounded in his mind. What he noticed was the visual landscape emerging from the sea of protesters.

Lawrence artist Lora Jost created a piece of art advocating peace and printed the image onto postcards. The art was inspired by a moment shared with her 11-month-old son, Nicholai.

The idea is to get people to stop and think about the repercussions of a pre-emptive strike against Iraq. Erica Goddard, a 17-year-old Lawrence Alternative High School student, hopes the stark images of death that 4-1-1 plans to display if war breaks out will have that effect.

"It's not going to subtly say anything at all," she says. "It's going to smack them in the face and say, 'We're killing people. Wake up!'"

If anything, creating the work and talking about its message keeps the artists from internalizing their fears, frustrations and sense of powerlessness. More than that, though, these artists don't feel right about silencing their creative responses to what they can't condone.

"I think it's a necessary job for an artist because we put ourselves in the position of bringing a different language to a wider audience. We're interpreters in a way," Loewenstein says. "I feel very strongly about my responsibility in that tradition."