Jewel of the auction

Longtime Lawrence metalsmith Jim Connelly treads a fine line in his craft -- the line that separates jewelry that people will wear with jewelry that makes an art statement.

For 30 years, he has formed silver, gold and precious stones with hammers, torches and a creative spark in an attempt to blur that line.

"You don't want to compromise too much," said Connelly, owner of Silver Works and More, 715 Mass.

The pendant he created to be the signature piece in this year's Lawrence Art Auction seems to strike a harmonious balance between form and function. Its weight shifts depending on whether it's worn as a pendant or a pin, but its intricate details remain the same.

Tiny shards of metal -- some intentionally cut, others plucked from leftovers on his workbench -- create texture inside two sweeping planes that are bound together by a deep blue lapis lazuli set in a 22-karat gold bezel.

Connelly has contributed work to the Lawrence Art Auction for just about each of its 22 years. In the past, he spent an average of three to four days creating his auction pieces.

"This time, I spent three weeks," he said.

Rick Mitchell, director of the gallery and special programs at the Lawrence Arts Center, the auction's beneficiary, said it had been several years since the featured artist had been a jeweler.

"Jim is such a solid citizen in the arts community here, and he's contributed consistently all this time," Mitchell said.

This year's auction will be April 12 at the Arts Center, 940 N.H. The public can take a sneak peak at the donated art during the auction's preview exhibition, which begins Thursday in the center's galleries. 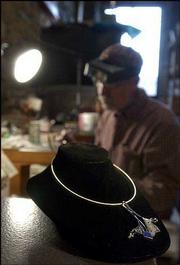 Lawrence metalsmith Jim Connelly has created a pendant from silver and gold with a lapis stone that will be sold at this year's Lawrence Art Auction at the Lawrence Arts Center. Connelly, who owns Silver works and More, 715 Mass., was chosen as the featured artist for the auction, which will be held April 12.

The Lawrence Art Auction began in 1980 as a way to encourage artists and art lovers to support the Lawrence Arts Center. It attracts about 600 people on auction night; hundreds of others view the preview exhibition.

Last year's auction generated more than $60,000, which was used to support the center's exhibition program. About 110 works will be available in the silent auction. Silent auction bids may be placed any time during the preview exhibition.

Connelly's piece is valued at $850. He talks about it in terms of contrasts.

"I think of nature and man," he said. "Nature's kind of rough textures. You come along with a road in between it, and you've got shape. The negative area becomes an important aspect."

Then there's the azure-hued stone, which only becomes the focal point if viewing the piece from a distance.

"I'm not one to make a stone the central object necessarily," he said. "I try, as a designer, to express what's going on around the stone."

Creating jewelry is a high-stakes endeavor. The scale can be so minute; one detail can take hours to perfect. Then all that labor can be negated if the torch rests too long in one place or the piece gets caught on the buffing wheel.

After 30 years in the craft, Connelly doesn't lose many pieces any more. And he's still stimulated by the creative process. He says his finished pieces rarely look exactly the way he conceived them in his sketchbook.

"I enjoy never quite knowing what the finished piece is going to be," he said.

Connelly's creative streak first showed itself when he was a young boy.

"As a child, I made my own toys, whether it was building cars or carving tomahawks and guns to play with," he recalled.

He got interested in machine shop in high school, where he picked up welding. A year into Hutchinson Community College, he decided he wanted to be a bacteriologist.


"I enjoyed the microscope, looking through the microscope at small little creatures," he said. But that didn't work out, and Connelly ended up at Kansas University, where he studied art education. "I slowly moved into the arts because that's where I was successful and was encouraged."

After a four-year stint in the U.S. Air Force, Connelly got a master of fine arts at Kansas University. He had his heart set on painting, but discovered an appeal in working metal with his hands.

When he's not toiling in his studio at the back of the store (he works there more than 40 hours a week), he enjoys gardening, cooking and playing golf. It's the pursuit of perfection that keeps him going.

"To be able to survive in business by selling things out of your head for 30 some years is pretty darn good," he said. "But nothing's ever perfect. There's always some little flaw that makes you humble, that pushes you to go and do the next one."