Chicago — On this St. Patrick's Day, raise a glass to Francis O'Neill.

If the name doesn't ring a bell, he was police superintendent in Chicago a century ago. If it still doesn't sound like he warrants a toast, listen to traditional Irish music. He saved it.

"Without him we would have no way to pick among the various (songs) and say this is what they sounded like," said Richard Jones, a music librarian at the University of Notre Dame. The music "would have died or it would have gotten changed so much the original never would have been remembered."

The story of Francis O'Neill is the story of a man trying to preserve the music of his people. Born in County Cork during the Great Famine that killed as many as a million people, O'Neill grew up at a time when people were leaving the country in droves searching for a better life.

"All the immigrants were leaving Ireland and taking chunks of tradition with them," said Noel Rice, the director of the Academy of Irish Music in Chicago.

O'Neill also left Ireland and ended up in Chicago, where he worked as a police officer and rose through the ranks to become superintendent in 1901. He was respected for his toughness and honesty, and once even arrested an alderman -- an action that could end a police career at the time.

As he had done in Ireland, he listened to and played the music of his homeland. But in America, he saw that while the music was being played, nobody seemed to be writing it down. "The fear he had was it was dying," Rice said. "That's what drove him."

O'Neill set out to put to paper what he was hearing. When he learned Irish musicians were in town, he'd track them down. "The joke was he'd try to put them on the police department so he could keep them here," said Leonard Aronson, who produced and wrote a documentary, "Francis O'Neill: The Police Chief Who Saved Irish Music." 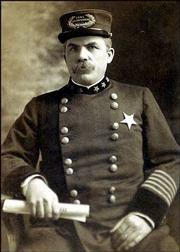 Francis O'Neill, shown in an undated family photo, was police superintendent in Chicago a century ago and is credited by some with preserving traditional Irish music.

O'Neill could not read music, but a sergeant in the department could. So he would play the music he heard for the sergeant, who would write it out.

At the same time, "he would go through old books as well as diaries and other publications and letters and books about poetry," said Jones, of Notre Dame, where O'Neill's personal collection has been since he donated it in 1931. "He would cross-reference various tunes and the various words."

O'Neill spent years collecting songs, both during his career with the police and after he retired. By the time he died at age 87 in 1936, he was credited with collecting about 3,500 songs, some dating back as far as 1550 or 1600, Jones said. Many of them cannot be found anywhere else.

"He published them at a time when that wasn't being done in Ireland," said Beth Sweeney, director of the Irish Music Center at Boston College's Burns Library. "This resource is used here and it's used in Ireland."

In Ireland, O'Neill is honored with a statue in County Cork, and his work remains influential.

Yet, in his last years, O'Neill was "a very disappointed man," said Lesch. He thought that once the Irish in America heard the music they would love it, she said. Instead, she said, "They didn't want to love it. They wanted to be American."