Without a doubt, Vice City is a great game. But if you've already played through GTA3, it's going to get old real fast.

By by Dustin Hall - gamer contributor

Its good to know that deep within every person lays the desire to break loose in the most immoral fashion possible. This certainly seems true with the rampant success of Grand Theft Auto 3, and again in GTA: Vice City, its pseudo sequel. 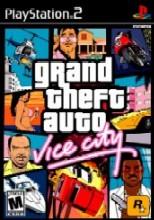 Vice City is a prequel to GTA3, taking us back to 1986, the days of slap bracelets, the new Coke, and A Flock of Seagulls (who are included on the soundtrack), to show how our favorite drug dealer and hit man got his start.

Many are already familiar with the GTA series, or at least with the now infamous part three, a milestone in game marketing. The rest had best be aware that this game is not for kids or the faint of heart. Hidden amidst a gloriously detailed city, containing a variety of individual dens and a surprising amount of detailed interiors, is a shockingly violent group of residents, comprised mostly of gang members and trigger happy cops, ready to give and receive a messy death at any moment. Nearly two million gamers have experienced the joy of carjacking strangers and being shot down by a squad of SWAT officers. Perhaps greatest of all is the ability to pick up a gleeful prostitute, partake of her service, pay for the privilege, and then beat her to death to get your money back.

A plot? Yes, I suppose there's one in there somewhere. It seems a few of your associates have some major Coke (the kind that goes in your nose, not your mouth) tied up with a few backstabbing no-good-nicks. It's your job to get it back, or take it by force, then deliver it to its rightful owners. Along the way you get to acquire a fortune in ill gotten money, using it to buy some of the hottest places in town, like Pole Position, every Atari nut's favorite strip club. Buying these seedy joints not only increases your income, not only gives you more safe houses, it also increases your offensive power. Did we forget to mention that the strip club's back room contains a chain gun?

Around your amorous adventures are references to everyone's favorite era, the 80's. Using Miami as a setting was a great idea. You'll find yourself getting lost in the day-glo world of pop culture. Every radio on every car you steal will have either Quiet Riot or Michael Jackson's Thriller blaring out of it. The game's soundtrack boasts a very impressive number of true 80's hits.

There's a lot to do while wondering at the marvels of Ronnie Reagan's USA. You can try to finish the incredible stunt list, or maybe you'd like to try your hand as a taxi driver. You can also assume the role of a humble pizza delivery boy, complete with crappy moped. Oh, and of course, there's violence, always violence. No matter your mission, most players will find themselves at the mall, stocking up at the ammo counter, and then unloading into a crowd of unassuming shoppers.

Rockstar did a lot to show off the power and success of their adult gaming title. There are celebrities abound in the game, all adding their voice talent. Your own character, Tommy, is voiced by Ray Liotta. Dennis Hopper (Speed, Super Mario Bros.) and Jenna Jameson (numerous pornographic movies) also make contributions. It's great to see a game make such a push into the mainstream, to garner so much star power that it's impossible to dispute that gaming is the entertainment industry right now. It's worth noting that with the addition of the great cast comes the additional use of the seven dirty words, whose appearance has increased exponentially since GTA3. This isn't a shock to older gamers, but parents who don't object to cartoonish, over the top violence may still take profanity into account.

The missions of Vice City are much better than those of its predecessor. They are not only more humorously violent, but also much more elaborate. It's a shame that many of the people who buy this game will never realize that. The flaw of GTA is that the random violence becomes such an integral part of the game play, that the central game and mini games are often overlooked. Most gamers will be content to run amok on motorcycles abusing the new drive-by mechanic. Given the choice between playing the nifty RC side game and capping a firefighter to steal his truck, well, you can guess where this is going.

The missions are much better this time.

That's what drags down Vice City's replay so much: it's a game that runs on a gimmick. The GTA series is a one trick pony, enamored with its own violent capacity. Grant you, that one gimmick is done really well, but how long can you drain the blood out of a city before it becomes a bore?

Vice is a marvel of gaming in presentation. While its people are still fairly bland, the City itself is enormous, detailed, and beautiful. The setting alone gives the graphics a decent grade. The variety of weapons and vehicles available are amazing, greatly improved from GTA3. More places, more people, just more to do in Vice City. But it feels like we've done it before, and in many ways, we have.

So, without a doubt, Vice City is a great game. But if you've already played through GTA3, it's going to get old real fast. Once you've completed the missions, a task that will take about four days of play, the game is done, unless you really, really like splitting heads to a disturbing degree.

The helicopter is a welcome addition.

Rockstar tried very hard to keep this game fresh. The helicopter addition was fantastic, and they knew what they were doing by allowing you access to the entire city all at once, a fantastic feat considering its size. And despite how much I appreciate all of these additions, I can't help but question the value of the purchase. Despite the additional flash, the game remains the same.