Rapid-fire shooter that doesn't get repetitive? It's true!

The highly-anticipated sequel to the popular rail shooter is out and it doesn't disappoint. From the get go, you are thrown into a whirlwind of shooting action that doesn't get too repetitive due to the smart foreground changes and dragon upgrades. 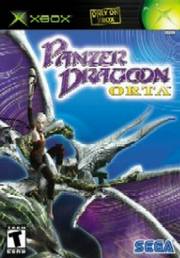 So you are Orta, a chick with no friends and no history trying to find out why these dragon-esque beasts want to kill you. One night while in prison, you get attacked, only to be saved by the friendly dragon. No, not Puff, but your new hero-dragon. So you ride him like a horse, blasting away at an evil empire mixed with an epic story with random hints of oriental lore...blah blah blah.

I'm all about a good story, but let's get real, these types of games are all about the mindless explosions and rapid fire weapons against huge bosses. Panzer Dragoon Orta delivers.

What makes this game as fun as the first Panzer is its perfect pacing. You can fly into dragon upgrades to make your weapons faster and more powerful, but you have to be selective on how you distribute. You have three dragons you can switch between: a normal firing dragon with lock-on capability, a slow but powerful dragon with lock-on and a super elusive heat-seek firing dragon that has no lock-on. Depending on the situation, you will need to use one of the three. You can upgrade all three to different levels, increasing their effectiveness.

The level designs are good. Even though you are moving forward, there are different paths you can take in each level by biasing right or left at a certain time, sometimes unlocking goodies. You also can slowdown, speed up and rotate 90 degrees at a time, which is essential to beat certain bosses.

Besides the graphics being amazingly colorful, successfully blending primaries and fluorescents, the enemy designs are truly original. In the second level there are these butterfly-type things in hordes that look remarkably like the MSN butterfly. So Linux enthusiasts, if you hate Microsoft, you might get a thrill out of annihilating these, uh, things. So go buy a Microsoft Xbox to do that. (Brilliant)

Nothing drives home the originality of design more than the boss battles. I have no words to describe some of the creatures and shapes. They are likened to nothing of this world and must be seen to be believed. Not that you will be "Woah that's the most amazing thing ever..." more like "What the #$@% is that supposed to be?"

Sega is responsible for this super-fun shoot-em-up. It's the same team that did the super-underrated Gunvalkyrie. It shows in the generic menus and sound effects. Everything heard is sufficient, but nothing stands out as soundtrack-worthy. The menu sounds are as annoying as an old alarm clock buzz.

I suppose after you beat it once you can go back and search for all the secret paths, but it won't be as fun. However there are countless unlockables, including the original Panzer Dragoon game, which will enhance your replay value.

Perfect time to use your lock-on feature.

I loved it, but I don't play it anymore. Great while it lasted, definitely worth a purchase.