Los Angeles — A year after two black nominees won the lead-acting prizes for the first time, the Academy Awards are back to a likely sweep of the four actor categories by white performers. 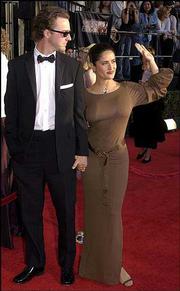 Yet some find it encouraging that at least a couple of nonwhite actors managed to score nominations from an academy whose early years were virtually devoid of minority membership and which even in the past decade has had years without a single nonwhite acting nominee.

"I try to look at it as, last year was a big year and that meant a lot, and it may take a few years before we really see the fruits of what happened last year. It doesn't happen overnight," said Halle Berry, who won the best-actress Oscar last year for "Monster's Ball."

Last year, Denzel Washington won the best-actor prize for "Training Day," and Will Smith of "Ali" was nominated in that category.

The only other time three blacks were nominated in the lead categories was 1972. Paul Winfield was up for best actor for "Sounder," and Cicely Tyson of "Sounder" and Diana Ross of "Lady Sings the Blues" competed for best actress. All three lost.

Advocates of greater diversity in film were thrilled over Berry and Washington's wins, considering only six black actors -- or 2.2 percent of the 278 winners -- had received acting Oscars at the previous 73 Oscar shows.

Few saw last year's Oscars as a major shift toward racial inclusion in Hollywood, though.

"I looked at it as, they both deserved those awards. ... But it's not the kind of thing I held on to, like, 'OK, we've made it. We've arrived,"' Latifah said. "I think as long as there's racism in America, there's always going to be racism, period.

"I don't really look at it as everything has changed. I appreciate my nomination. I'm proud of what we did with 'Chicago,' so I'm just going to go and enjoy the moment."

The acting branch at the Oscars was almost exclusively a whites-only club through the 1950s, though there were occasional nonwhite nominees, among them supporting-actress winners Hattie McDaniel for 1939's "Gone With the Wind" and Miyoshi Umeki for 1957's "Sayonara."

The ratio of nonwhite nominees and winners has gradually improved since the 1960s. Yet in their best years, they have earned no more than three of the 20 Oscar acting nominations -- or 15 percent. Nonwhites make up 30 percent of the U.S. population.

While Hollywood still draws heavy criticism for its lack of racial diversity, the last two decades have brought a better range of serious roles and more Oscar nominations for nonwhites.

This year was especially solid for Hispanics. Besides Hayek's nomination, two of the five original-screenplay nominees are Spanish-language, "Talk to Her" and "Y Tu Mama Tambien." "Talk to Her" creator Pedro Almodovar also earned a best-director nomination, and Mexican drama "El Crimen del Padre Amaro" was nominated for foreign-language film.