"The bulk of my films are about people," says documentary filmmaker Tony Palmer.

"The kind of people that attract me (as subjects) are ones that display a kind of moral, physical and emotional courage which most people are incapable of. That's true whether it's John Lennon or Maria Callas or Frank Zappa. They go out on the kind of limb that most of us never want to visit or never even want to contemplate." 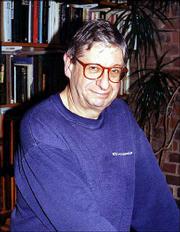 Tony Palmer will speak at Kansas University about his 36-year career documenting the world of rock music.

The British director will be in Lawrence on Monday to give an 8 p.m. lecture titled "Sex, Drugs and Rock 'N' Roll" at Kansas University's Woodruff Auditorium. The evening will be devoted to his experiences creating dozens of films about the world of rock music.

Palmer's introduction to the rock counterculture came via one of its greatest ambassadors.

"I was at Cambridge University (in 1964) working for the university newspaper and I went to a press conference given by The Beatles," Palmer recalls, phoning from his home in England. "After the conference, I was poked in the back by a man who said, 'You didn't ask any silly questions. Why not?' And it was John Lennon."

"He asked me if I would show him around Cambridge. I said, 'No, because you're much too famous and we'll be mobbed.'"

Lennon eventually talked Palmer into giving him a tour of the city (the Beatle wore a rain coat and long beard as a disguise). When they parted, he told the young journalist to "give me a call when you next come to London."

Palmer didn't actually make it to London until two years later when he arrived there after graduation to start a new job. On a whim, he tried Lennon's number and left a message for him.

"To my astonishment, he rang me back and said, 'Come over. Where have you been?'" Palmer says.

"We became good friends. The fallout from that is when I started to make a name for myself in the BBC, he said to me, 'Why don't you do something serious, like a film about rock 'n' roll?'"


Palmer says Lennon helped introduce him to the "artists that mattered" during rock's most ambitious era. The collaboration resulted in the 1968 TV documentary "All My Loving," which highlighted dozens of contemporary performers.

"There were people who until that point had never appeared on British television -- people unknown to the general public like Jimi Hendrix, The Who, Cream and so on," he says. "By chance, my reputation -- if that's the right word -- was made virtually overnight."

That reputation led to what would become one of Palmer's most infamous works: the midnight movie classic "200 Motels." This trippy 1971 effort depicted the surreal road life of musician Frank Zappa.

Palmer first collaborated with the eccentric figure while shooting "All My Loving." When Zappa approached United Artists about doing a movie, the company agreed because it knew a soundtrack would be profitable. But it didn't want to tote the full bill for a feature.

Palmer and Zappa came up with a plan -- one that would prove rather revolutionary in terms of cinematic history.

"It became clear that we couldn't afford to shoot it on celluloid," Palmer remembers. "The opticals would take forever, and it really wouldn't give (Zappa) what he needed. I said, 'Why don't we shoot it on videotape.' He said, 'Well, that's no good because we won't be able to show a videotape in a cinema.' Nobody at that point in 1971 had actually transferred tape to film."

With the help of some friends at Technicolor, Palmer began to theorize they could use the same three-color process to convert the crude video footage into a more presentable format.

"We did a test and, to our astonishment, it worked," he says. "The interesting thing about '200 Motels' was that it was the first-ever film released in the cinema to have been shot on videotape."

Transition to other styles

Palmer's 36-year career in filmmaking has remained spectacularly prolific. In addition to his rock legacy, he also has crafted documentaries on subjects ranging from comedian Peter Sellers, opera star Maria Callas, publisher Hugh Hefner and pianist Liberace. And he's helmed dramatic films (often based on classical composers) that have starred actors such as Richard Burton, Ben Kingsley and Laurence Olivier.

"I'm always working on several (films) at the same time because they percolate for a long period," he says of his current projects, the most recent of which was "Hero: The Bobby Moore Story" about the British soccer legend. "I'm now doing numbers 102, 103 and 104."

Still, with these 100-plus subjects, Palmer admits there were a few that slipped through the cracks that he wished he could have documented.

"I was about to make a film with Nirvana," he says. "But you know they do keep killing themselves, these guys."

Palmer will spend much of his week in Lawrence discussing his work at various KU classes. Separate from his rock lecture, he also will be showcasing his knowledge of classical music and opera -- subjects of which he dedicates more of his time these days.

Asked how the 60-year-old evaluates the work he did while still in his 20s, Palmer replies, "They are a bit like ancient history to me, as you can imagine."

However, he says that while supervising the remastering of the "Cream Farewell Concert" for its DVD release, he had time to study the piece for the first time in a decade and gain a new appreciation for it. He notes that when he shot the performance in 1968, he had only four color video cameras on fixed platforms at his disposal.

"If I were to do it today, I would use 28 little cameras up their noses and probably up their asses as well," he says, laughing. "But I would never be able in the editing to recreate that kind of explosive fury of what happened that night. We were being driven along completely by the energy and power of the music.

"I'm not anywhere as embarrassed about those old films as I probably should be."