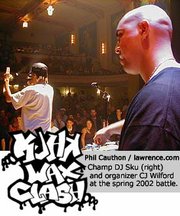 For the last three Wax Clashes, it's been all about DJ Sku.

In fall 2001, Sku came way out of left field (that is, Topeka) and nonchalantly won KJHK's second annual battle with sheer scratch skills. He repeated the victory in spring 2002 by beat-juggling two copies of Nelly's "Hot in Here' and earned the three-peat in fall 2002 by injecting trash-talk from "The Godfather" into his routine.

So when Sku entered the Oro Negro DJ battle on March 12 at the Hurricane, everybody expected him to win. But something went terribly wrong.

The title instead went to DJ Spin Styles, deck-master for KC's Hip-Hop Addicts and a close personal friend of Sku. Spin Styles won the competition by mixing hip-hop, drum and bass and jungle records.

"I just read the crowd right," Spin Styles said. "I knew what would get them hyped."

Sku will have a chance to avenge his loss Tuesday at Liberty Hall when KJ throws its fifth Wax Clash. He will face off against a dozen or so other DJs from Lawrence, Kansas City, Topeka and Wichita. The event will also feature a break-dancing showcase and an open mic session for poets and lyricists.

"We try to represent as many elements of hip-hop as we can," said CJ Wilford, event organizer and host of KJHK's longstanding program Hip-Hop Hyp. "But the DJ battle takes precedence because ultimately people are there to see the competition."

Sku said the loss to Spin Styles motivated him to spend more time preparing for the Wax Clash.

"I've been pretty much locked in my bedroom practicing," he said. "I think everyone's expecting me to do some kind of Superman routine or something."

B-boys and -girls gettin after it during the spring 2002 battle.

Superman or not, Sku said his best skill was his unpredictability.

"I'm gonna come with a different style this year that I don't think people are expecting," he said. "I put a Led Zeppelin record on the other night and I was like, 'Damn, I can do something with that!'"

Spin Styles said he thinks he has a chance to upend Sku again.

"If I can get the crowd on my side and pull off a really clean set I think I can take him," Spin Styles said.

Behind the veil of competition, Sku and Spin Styles said they're good friends.

"We'll talk a lot of smack on the table but everybody has complete respect for each other," Sku said.

Both Sku and Spin Styles will face stiff competition from Lawrence's DJ Proof and DJ Cyncere. Both DJs have a reputation for going deep into the three-round battle.

"They're the cream of the crop if you ask me," Wilford said.

The Wax Clash is still accepting entries for the battle. Interested DJs should e-mail CJ Wilford at kjdjbattle3@hotmail.com.