Los Angeles — The hoopla hushed and the merriment muted, the show still goes on Sunday for the Academy Awards, whose organizers promise a tastefully toned-down celebration considering the war with Iraq.

Missing from the 75th Oscars will be the splashy red-carpet arrival area where stars preen, pose and prattle about their designer gowns. Formal evening wear remains a must, though Oscar guests are expected to moderate the glitz and glamour out of respect for U.S. soldiers fighting to topple Saddam Hussein's regime. 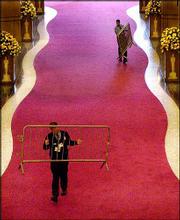 Security guards move barricades into place on the red carpet inside the entryway to the Kodak Theater, site of the 75th annual Academy Awards, in the Hollywood section of Los Angeles. Because of the war in Iraq, most of the traditional outdoor red carpet parade of stars before fans and the media has been eliminated.

Studios and other Hollywood groups still plan post-Oscar bashes, though many have dropped the usual gauntlet of reporters and photographers outside.

An extreme turn of events could force postponement of the Oscars or prompt ABC to bump the live broadcast in favor of news coverage. But organizers said they expect the show to come off as planned and that the ceremony this year takes on greater symbolic merit.

America at its best

"At a time when American culture and values are under attack all over the world, we think it is more important than ever that we honor those achievements that reflect us and America at our best," said Frank Pierson, president of the Academy of Motion Picture Arts & Sciences.

Gil Cates, the show's producer, said a friend who is executive officer aboard a Navy ship told him that it was important to carry on "as normal, as usual, that we should do the show. That it would be kind of a terrible victory for Saddam if we didn't."

A celebrity or two have backed out of the Oscars because of the war, among them Will Smith, who withdrew as an awards presenter, saying he was uncomfortable attending given world events. But Cates said organizers have seen no more last-minute cancellations among celebrities and other guests than they do every year.

The traditional tight security at the Oscars has been increased, including a National Guard mobile lab to test for suspicious biological or chemical substances. Pierson said Los Angeles Police Chief William Bratton told Oscar planners that "he felt the safest place to be in America was probably at the Academy Awards on Sunday night."

If the show goes off as planned, a few notable firsts might come out of the Oscars. Some possibilities:

l Best-picture front-runner "Chicago" might be the first musical since 1968's "Oliver!" to win best picture. Four cast members of "Chicago" are nominated, with best-actress contender Renee Zellweger and supporting-actress nominee Catherine Zeta-Jones appearing to have the best shot at becoming the first acting winners from a musical since Liza Minnelli and Joel Grey for 1972's "Cabaret."

l Jack Nicholson could walk away with his fourth Oscar, tying Katharine Hepburn for most acting awards. Nicholson is up for best actor for the black comedy "About Schmidt," earning his 12th nomination.

l Martin Scorsese could finally win an Oscar, though for a movie considered inferior to his best work. Scorsese is up for best director for "Gangs of New York," after losing with his previous nominations for "Raging Bull," "The Last Temptation of Christ" and "GoodFellas."

Awards campaigning usually provokes sniping among rival studios, and Scorsese's nomination resulted in this year's nastiest feud. Competitors griped about distributor Miramax's tactics to characterize "Gangs" as a summation of Scorsese's work and suggest that he might deserve the Oscar as a career honor.

Scorsese is considered a front-runner, though "Chicago" director Rob Marshall took the prize from the Directors Guild of America, whose winner usually goes on to win the Oscar.

Also competing for best director is Roman Polanski, who would face arrest if he entered the United States to attend the awards. Polanski, nominated for "The Pianist," has been living in exile since fleeing the United States 25 years ago to avoid sentencing for having sex with a 13-year-old girl.

"The Pianist" is part of a best-picture field of generally dark and dour films, including "Gangs," "The Hours" and "The Lord of the Rings: The Two Towers." Yet it is "Chicago," a cynical but rousing song-and-dance satire, that could dominate the evening. "Chicago" leads the pack with 13 nominations.

Host Steve Martin is expected to crack wise, delivering what Cates called a "don't miss it" opening monologue. Presenting awards will be Julia Roberts, Susan Sarandon, Harrison Ford, Denzel Washington and Halle Berry, while Peter O'Toole will be honored with a lifetime-achievement Oscar.

All that revelry aside, organizers are aiming for a sober, dignified mood, much like the Oscar ceremonies of World War II.